Some familiar faces are level on points at the top of La Liga after winning at the weekend - Barcelona, Real Madrid and, um, Celta Vigo.

It was business as usual in France and Germany, with Paris St-Germain and Bayern Munich - who broke a Bundesliga record - victorious.

But what are the stories you might have missed? A league title won, a Premier League cult hero scoring a hat-trick and the tightest of title races, BBC Sport has dug beneath the surface of European football this weekend - and this is what we have found.

Borisov BATE their opponents with ease

There are no easy games in football these days. Unless you're BATE Borisov, in which case every domestic game is pretty easy. The Borisov Automobile and Tractor Electronics boys clinched their 10th Belarusian title in a row this weekend.

Friday's 2-0 win over Vitebsk was enough to wrap up the league with four games remaining.

Former Arsenal midfielder Alex Hleb, who won the 1999 and 2012 league titles with Bate before rejoining them for a third spell this year, missed the game through injury.

The 34-year-old is a doubt for their next game, which might not be quite as easy... at home to his old club Barcelona in the Champions League.

Title wrapped up by October? 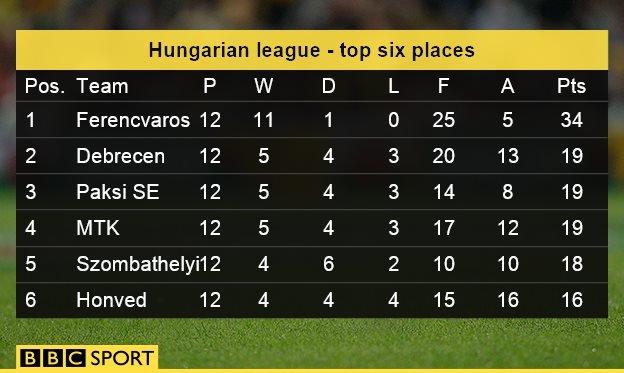 No silverware is handed out at this stage of the season. But to be honest they can already start engraving Ferencvaros's name on the Hungarian league trophy.

The Budapest side have not worn the metaphorical crown of champions since their 2004 title triumph but would need a spectacular implosion not to end that drought after building up a 15-point lead after 12 games.

The only points they have dropped so far have been in a goalless draw against one of Europe's unlikeliest top-flight clubs, the Ferenc Puskas Football Academy.

A rich sponsor gives you wings

You might have spotted a theme to this weekend's European things you might have missed (ETYMHM as nobody is calling it) and that's teams having an easy life.

Red Bull Salzburg are not the most popular team in Austria after the energy drinks company took over and rebranded Austria Salzburg in 2005, but they are the best.

The capital side, chasing their third consecutive title, went top of the Austrian Bundesliga with an 8-0 win over Admira, who are fourth in the table. It is the third time they have scored eight in a league game in just over two years.

After bringing you tales of dominance from across Europe, it's time for a change of pace. Going into the final day in Finland's top flight, there are three teams that could clinch the title.

SJK, who have British players Richie Dorman and Wayne Brown at the club, top the table by one point, and are at home to bottom-placed FF Jaro on the final day (Sunday, 25 October at 11:00 GMT).

The club from Seinajoki were formed in 2007 and have never won the league.

Another team chasing their first ever title are second-placed RoPS, who are at FK Lahti on the final day.

The third team in the mix, HJK of Helsinki, have a slightly different pedigree. The current champions have won more Finnish titles than anyone else, with 27. They need both teams above them to drop points to have any chance.

The 35-year-old, in his second spell at the club, had helped his side lead 5-0 at the break with a 39-minute hat-trick before they eased up after the break.

Kuyt's sixth Eredivisie treble ensures his team are only behind league leaders Ajax on goal difference.

It's another Champions League (and Europa League) week, so how did the opponents for English and Scottish clubs get on?

Dynamo Kiev, who host Chelsea on Tuesday, were thrashed 3-0 at home by title rivals Shakhtar Donetsk.

Bayern Munich, who visit Arsenal, became the first club to win their opening nine Bundesliga games with a 1-0 success at Werder Bremen.

In the Europa League, Liverpool are at home to Rubin Kazan, who beat Ufa 3-1. Celtic are at Molde, who saw off Mjondalen by the same scoreline.

Anderlecht, who are at home to Tottenham, won 4-0 at Zulte Waregem.