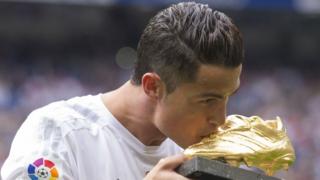 The 30-year-old Portugal forward scored his 324th Real goal in 310 games when he netted in the 60th minute of his side's 3-0 victory over Levante in La Liga.

Ronaldo, who signed for Real in 2009, overtook previous record holder Raul, who scored 323 goals in 741 games.

The club had already considered Ronaldo the record holder as they credit him with a goal deflected off Pepe in 2010.