Evans, 52, who has signed a rolling contract until 30 June, is Leeds' sixth head coach since Massimo Cellino took over the club in April 2014.

Rosler, 46, was sacked on Monday after just 12 games in charge with Leeds 18th in the Championship.

Meanwhile, Cellino has been banned from running the club by the Football League for the second time in a year.

Cellino was found guilty of an offence under Italian tax legislation relating to the non-payment of VAT on the importation of a Land Rover vehicle, leading him to be disqualified under the owners' and directors' test.

The Italian has until 28 October to appeal against the decision.

He was banned by the Football League in December after they obtained documents from an Italian court, which had found Cellino guilty of tax evasion in relation to his failing to pay import duty on a yacht.

The former Cagliari owner returned to the club's board in May after having his initial ban extended from 10 April to 3 May.

Evans left Rotherham in September having led them to two promotions in his three full seasons in charge.

The Scot attended the final game of last season at Elland Road in a sombrero and shorts after vowing to do so if he kept Rotherham in the Championship.

Last season was his first managing in the second tier of English football, having previously managed Boston United and Crawley before taking charge of Rotherham.

Prior to his latest ban being announced, Cellino told BBC Radio Leeds: "We have a good team. I like his (Evans) passion, fight and he is determined."

Evans added: "I'm humbled and honoured to manage this giant of a club.

"Someone has got to get it right here. Why not me? I have won a lot of football matches.

"If I fail I become a statistic but I will put my life into the Leeds job. I will move into the city and the fans will see me."

The Whites travel to Fulham on Wednesday in what will be Evans' first game in charge.

Former Brentford and Wigan boss Rosler took charge at Elland Road in May but Saturday's defeat by Championship leaders Brighton means they are without a home win all season.

Rosler won only two of his 11 league games in charge and had lost his past three before being relieved of his duties.

He told BBC Radio Leeds on Thursday he was not aiming for promotion this season and he felt "relaxed in Cellino's company" despite his reputation for sacking managers.

Italian Cellino sacked 36 head coaches in his 22 years in charge of Cagliari, leading him to be nicknamed 'the manager eater'.

Rosler said last week: "Mr Cellino and myself are having daily conversations and I feel relaxed in his company.

"I can say what I want to say and he respects my opinions even if he doesn't always agree with them."

Match of the Day presenter Gary Lineker tweeted: "Uwe Rosler becomes the 5th Leeds manager to be sacked by Cellino. His hire 'em and fire 'em policy doesn't seem to be working too well."

BBC Sport's chief football writer Phil McNulty tweeted: "Uwe Rosler sacked. Not quite sure what Leeds United's fans have done to deserve all this. The club now a monument to instability." 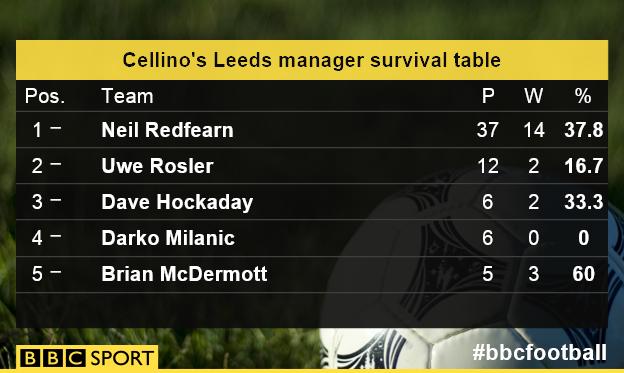