Recruiting former England international Kevin Phillips as part of Derby's new-look coaching set-up has made a big impact on the club's strikers, according to forward Chris Martin.

Phillips, who scored 285 goals during a 20-year career, was brought in by new head coach Paul Clement in September.

"For a front player he has been very good," Martin told BBC Radio Derby.

"With the experience he's got and the quality he had when he was a player, he's rubbing that off on the lads."

Martin, 26, has scored nine goals in 14 appearances this season, including two in Sunday's impressive 4-2 win over Wolves and his first for Scotland in the 6-0 victory against Gibraltar.

And he believes Phillips's personal touch has played a significant part in his form - and also helped the club win five and draw one of their last six games. 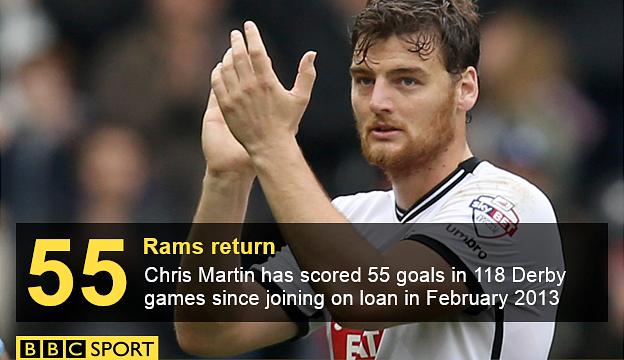 "We have done quite a few one-on-one sessions with the front players," added Martin.

"Most weeks we are getting two or three sessions of individual work as strikers and wide players working with Kevin and I think that is showing on the pitch with the quality we have going forward.

"I have a hit a little bit of form goalscoring-wise and managed to add to that with my first international goal."

Derby failed to win any of their first six games this season, but their impressive six-match unbeaten run since losing to Leeds United has seen the climb to sixth in the Championship table.

"We made eight or nine signings in the summer, on top of probably nine or 10 different members of staff coming in, so it's not going to happen over night," said Martin.

"It's been very positive the progression we have shown. We have got better and better.

"There is really good competition in the squad. We have a real good group and a great team spirit. We are gelling together and starting to see the reward."