Wales midfielder Jess Fishlock has spoken about the challenges she has faced as a high-profile gay athlete.

Fishlock is a former Wales captain and plays for Seattle Reign in the National Women's Soccer League in the USA.

The 28-year-old revealed she had suffered homophobic abuse on social media in the past and was keen to protect her private life.

"It's my life and it's a huge part of who I am," Fishlock told BBC Radio Wales Sport.

"I have a girlfriend who is exceptional and who I spend a lot of my time with.

"People can be cruel at times and what I don't want is for a crazy fan ending up abusing her for no apparent reason."

Fishlock, who will join Melbourne City on loan as player-coach during Seattle's off-season, said she was comfortable with her sexuality. 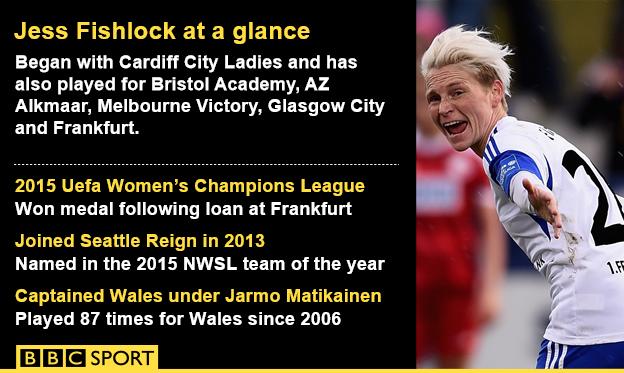 "We don't hide it and I certainly don't hide it. My family are fine and extremely supportive," Fishlock added.

"As much as we're fine, not everybody is fine with that situation and we're aware of that.

"But we're extremely respectful people and we will respect those who are close to us who are not, at this moment, OK with everything."

Former England women's captain Casey Stoney publicly revealed her sexuality for the first time in February 2014 and became the most high-profile active gay footballer in England.

Stoney, 33, said homosexuality was more accepted in the women's game than the men's game.

"There's a stereotype that everyone that plays a women's sport is gay, which is an obscene stereotype," Fishlock said.

"Athlete Ally is a great thing and I'm proud of being an ambassador for it because homophobia in all sports and all genders is a terrible thing.

Listen: Jess Fishlock talks to Steffan Garrero about her career and the challenges she has faced as a high-profile gay athlete.