Holders Barcelona dominate the Champions League team of the week after a comfortable 2-0 win over BATE Borisov saw them take firm control of Group E.

Barca - who beat Juventus in the final last May to win the European Cup for a fifth time - are without injured captain Lionel Messi but still have four players in the select XI.

Arsenal goalkeeper Petr Cech makes it in after a fine display against Bayern Munich - but he is the only Premier League player who makes the grade. 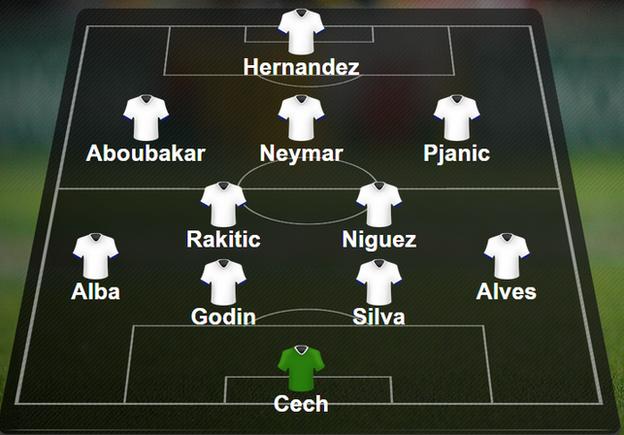 Manuel Neuer made a stunning one-handed save to deny Theo Walcott at one end but it was Petr Cech's stop from Robert Lewandowski at the start of the second half which proved to be the crucial moment as the Gunners went on to beat Bayern Munich 2-0.

Brazilian right-back Dani Alves has already won the Champions League three times with Barcelona and will fancy adding a fourth this season after another solid display during the 2-0 win against BATE Borisov.

Diego Godin's goals proved crucial as Atletico won La Liga in 2014 and reached the Champions League final, and he was immaculate at the back as his side thumped FC Astana 4-0 to keep pace with Group C leaders Benfica.

French champions Paris St-Germain shut out Real Madrid for the first time in 41 group games and Thiago Silva was a crucial factor - he made seven clearances and five interceptions at the back in the 0-0 draw.

As Barcelona enjoyed 74% possession against BATE, both full-backs were key outlets for the Spanish champions. Jordi Alba boasted a 90% pass accuracy rate and did not give away a single foul.

Barca's star man was not even in the starting XI on Tuesday night. Croatia midfielder Ivan Rakitic came off the bench after 18 minutes to replace the injured Sergi Roberto and scored twice after half time.

Atletico's Saul Niguez and midfield partner Gabi both had 124 touches in the 4-0 win over FC Astana - the most on the pitch, while only Jackson Martinez (five) had more than his three shots on goal.

When Miralem Pjanic curled in a brilliant free-kick to put Roma ahead after being 2-0 down against Bayer Leverkusen, a famous win looked on the cards for the Italian side. But two late goals gave Leverkusen a point in a stirring 4-4 draw.

With Lionel Messi injured for two months Neymar is even more important to Barcelona than ever - and the Brazilian set up both goals for match-winner Ivan Rakitic in Belarus.

Javier Hernandez missed a penalty for Manchester United during qualification for this season's Champions League but the Mexican may have found a home in Germany - his two goals helped Leverkusen come from behind to draw with Roma.

Porto are sitting pretty at the top of Group G with seven points from three games after a comfortable 2-0 win at home to Maccabi Tel Aviv. Striker Vincent Aboubakar started it off with a header, one of five attempts he had on goal.