Wolves ended their three-match losing run with a goal in each half as they beat Birmingham City in the West Midlands derby.

Dave Edwards capitalised on defensive confusion to fire his second goal in successive games from 12 yards.

Sheyi Ojo sealed victory when he curled in a low left-foot shot late on.

On the anniversary of his first year in charge, Gary Rowett's Blues were outplayed as they fell to a third home defeat in four games.

Wolves had lost their previous three games and began nine places behind Blues in the Championship table.

But, in contrast to their last visit to St Andrew's in April, when defeat contributed to them missing out on a play-off place, this time it was Wolves who caused an upset.

But the visitors owed a little to luck with the opening goal.

Blues' Jacques Maghoma tried to block Nathan Byrne's left-wing cross, but it deflected off his shoulder and when the ball bounced it span viciously over the head of Paul Robinson.

Former Wolves keeper Tomasz Kuszczak saved from Benik Afobe as he attempted to repair Robinson's error of judgement, but the ball fell for Edwards who calmly stroked home left-footed from 12 yards.

Blues did improve in the run-up to the break, but Wolves were worth their half-time lead.

And it was much the same story after the break as Wolves new loan signing Mike Williamson and skipper Danny Batth proved impenetrable to Blues' misfiring attack.

Wolves finally sealed the points six minutes from time when Ojo cut in from the right before sliding his left-foot shot just inside Kuszczak's right-hand post.

Birmingham manager Gary Rowett: "We did not show the quality we required. We needed to be more inventive and show more composure on the ball.

"Conceding a very poor goal against the run of play didn't help us. That was the disappointing thing for me.

"We have been very solid defensively and not given too much away but the two goals were poor from our point of view and very easy for Wolves to score.

"I have to say Wolves played well and I do not want to take any credit away from them."

Wolves head coach Kenny Jackett: "The three points are important to us. In our previous three games we have been too open and not competitive enough.

"We conceded nine goals in those three games but we restricted Birmingham to only one shot on target.

"We defended well as a team and showed commitment. We got the goals at the right time and hopefully we now have something to build on." 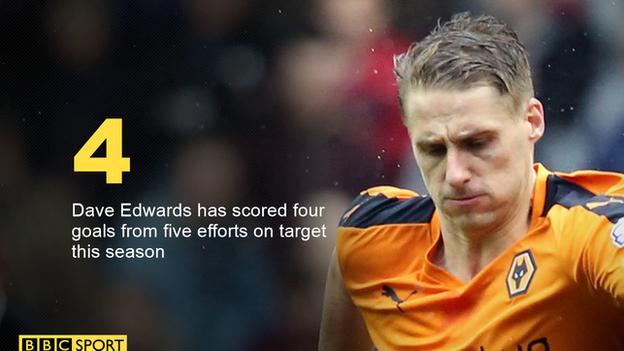