Ninety minutes. That was all that separated hundreds of amateur footballers from a place in the first round of the FA Cup.

It was fourth qualifying round day and we wanted you to be a part of the action by sending us your pictures from up and down the country, via #mobileMOTD.

Here are the best pictures from a busy day of non-league football.

Before kick-off: Wigs, curry and handshakes 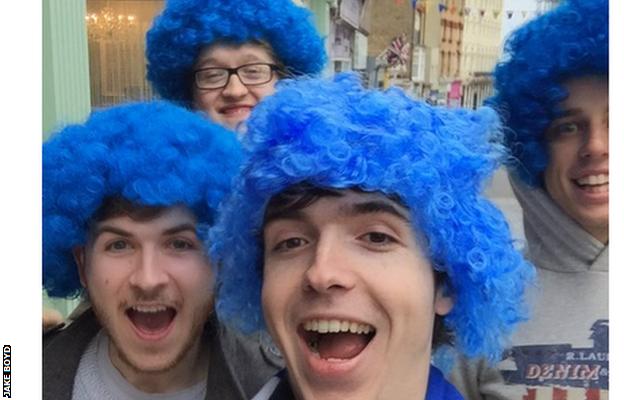 Jake Boyd and his mates were diagnosed with a serious case of FA Cup fever before Margate's early kick-off against National League leaders Forest Green. Only the face paint away from the full set. But it did not work as Margate of the National League South fell to a 2-1 defeat.

One of the day's biggest stories saw Sporting Khalsa of the Midland League Premier Division hosting FC United of Manchester. Khalsa only tend to draw a crowd of 50 or so but they were ready for big numbers on Saturday. They were not disappointed as a club-record crowd of 2,252 people turned up for the game against the National League North side. 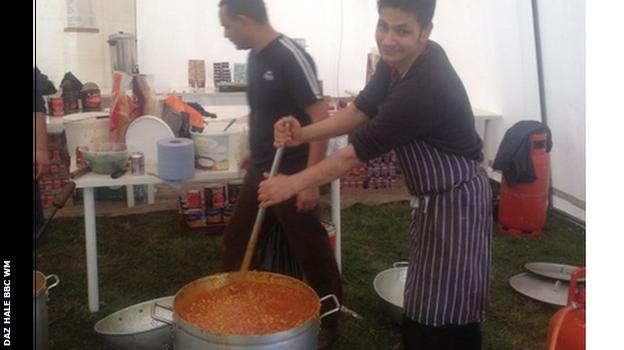 Marquees were set up at the Aspray Arena to cater for everyone - with a vat of curry being readied.

BBC WM reporter Steve Hermon made sure he was in prime position as Stourbridge of the Northern Premier League Premier Division took on National League side Kidderminster at Amblecote. Kidderminster have not won in the league yet this season - in 18 games.

The players and mascots shake hands before the game between Chippenham Town of the Southern League and Maidstone United of the National League South. Maidstone won the match 2-0.

During play: Celebrations, storms and records 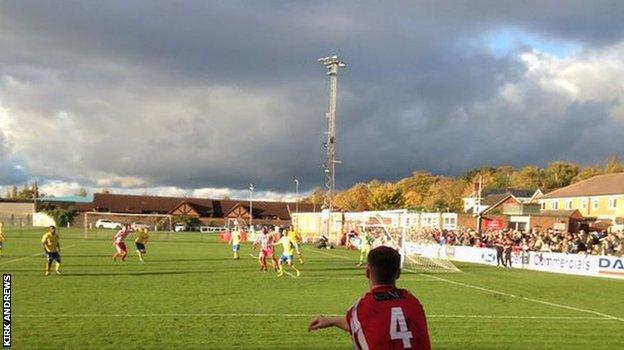 Most games in the fourth qualifying round of the FA Cup were played in wet or cloudy conditions. The storm had not arrived yet at Stourbridge in this picture.

It was a crazy match at Havant and Waterlooville. This picture was taken in the 72nd minute as Cheltenham Town, second in the National League, went into a 3-1 lead. However, four minutes later the hosts, who play a level below the visitors in the National League South, had pulled it back to 3-3. That was how it finished so the sides will have to do it all again.

AFC Rushden and Diamonds, from Division One Central of the Southern League, are only one of three teams from the eighth tier of English football in Monday's draw for the first round proper. This was the reaction from their players as they scored a goal in their 2-2 draw and earned a replay against Northern Premier League Premier Division side Barwell.

Sporting Khalsa were the only side from the ninth tier of English football to have made it into the fourth qualifying round of this year's FA Cup.

But, despite the bumper crowd, the home fans went away disappointed as their team lost 3-1 to FC United.

As part of BBC Sport's #mobileMOTD coverage, we filmed a variety of different aspects of Altrincham's 1-0 win over fellow National League side Chester. The footage was filmed on a mobile phone with BBC Sport granted access to various areas of the ground, from the dressing rooms to the terraces. Some of the footage was shown during Final Score on BBC One with further clips appearing on the BBC Sport website.

After the game: celebrations and parties

National League North side Worcester City beat former winners Coventry City last season and they caused another shock this year. They claimed a 2-1 win at National League side Gateshead. Deon Burton, who played for Jamaica in the 1998 World Cup, scored Worcester's first goal. 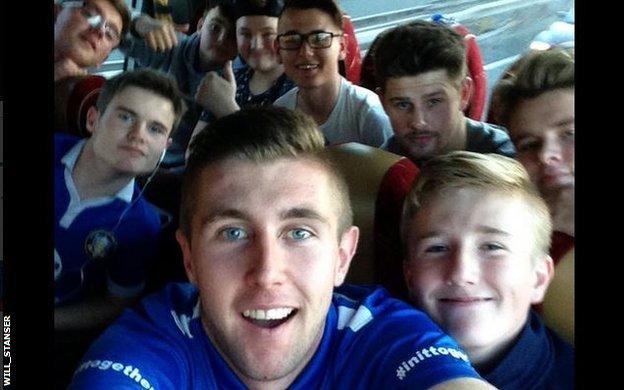 It was miserable weather at Maidenhead but the players were singing in the rain after a 3-0 win over National League side Woking. Maidenhead, who play in the National League North, will find out who they face in the first round proper in the draw on Monday at 19:00 GMT on BBC Two.

After Salford City reached the FA Cup first round for the first time, fan Craig Haworth posted a picture on Twitter of him with former Manchester United player Paul Scholes.

St Albans City reached the first round proper for only the second time in 13 seasons with a 2-1 win over fellow National League South side Weston-Super-Mare.