Wayne Rooney has been given a lot of stick for his performance in Sunday's Manchester derby and I think it was more evidence that he should not be leading Manchester United's attack.

I am not saying he should not be playing for United at all - I am one of Rooney's biggest fans and would always have him in my team even if he is out of form because of his influence on other players and ability to change the game with a piece of magic.

But it is clear that playing him up top on his own, often with his back to goal, is not working. He should have been in Ander Herrera's position, as United's number 10 behind their main striker, not their number nine.

Rooney slowed play down because he is no longer a player who can get the ball, face up to a defender and fly by him. That is the bottom line.

United do have someone who can do that in Anthony Martial. Just by playing him in Rooney's position against City would have meant they were far more of a threat. Instead, Martial was kept out on the left.

Rooney turned 30 this week and he has got to the stage in his career where his options are limited when he is so far up the pitch because he does not have the pace to run at defenders or behind defences anymore.

United struggled going forward for long spells against Manchester City, and did not manage a single shot in the first half.

Their problems in attack were not down to a lack of ambition, more that they had the wrong player as their centre-forward.

Rooney did not manage a shot on target against City, and only one shot at all - which was blocked.

He is usually effective when he comes deep to get the ball but on Sunday he was unable to find any space.

Centre-halves don't like having to guess whether the opposition striker is going to come short to look for a pass to feet or make runs on to balls behind the defence, especially if he is faster than them.

But City defenders Vincent Kompany and Nicolas Otamendi knew they were quicker than Rooney, and they also knew he was always going to want the ball played to his feet.

It meant they could squeeze up the pitch keeping a relatively high line and, with Fernandinho and Fernando almost always in front of them, Rooney was denied space in the area of the pitch he loves to operate in, between the halfway line and the edge of the area.

Rooney had around the same number of touches against City (50) as his average in previous Premier League games this season (52) so he was no less involved than normal, but he was under immense pressure whenever he got the ball and made far more mistakes than he would do usually.

His passing accuracy of 54.8% was well down on his average of 80.7% for the season and he lost possession 28 times - his average from his previous seven league games was 12.2.

Martial's speed would have scared City

If Rooney had been playing as number 10, with Martial in front of him, then Kompany and Otamendi would not have been able to press him because they would have left a massive hole for Martial to run into.

To me it is clear that is the right combination in United's attack but it seems there is an issue with Memphis Depay, who was on the bench at Old Trafford for the third successive game.

Louis van Gaal is using Martial on the left instead of Depay, and sacrificing Martial's pace down the middle, which means Rooney has to go back up top.

I don't think it is working. Not so much in terms of their results - I find United's style of play a little boring to watch at times, but they are only two points off the top of the table.

It is more to do with what they could be getting out of Martial, especially in tight games like the derby was.

His speed would have frightened Kompany and Otamendi, no doubt about it.

City's right-back Bacary Sagna is no slouch but Martial went past him like he was not there on a number of occasions.

We know Martial is a great finisher but against City, when he got past Sagna, he would find himself in a crossing position not a shooting position, and with only Rooney to aim for. 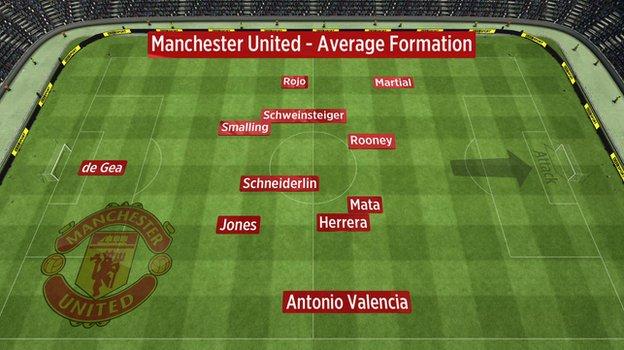 City solid because of defensive midfielders

For me, Sunday was a missed opportunity for Van Gaal.

With no Sergio Aguero or David Silva, City were far less of a threat than when they are at their strongest, and I thought it was a good time for United to go for the jugular.

Nothing near to that ever materialised, though. But while United were disappointing going forward, you have to give credit to City too.

Defensively, they looked far more solid than they have been for a long time.

Kompany's return was a factor - City have not conceded a goal in any of the six league games he has played this season, compared to eight in four league games without him.

But I thought it was more down to them pushing Yaya Toure forward and going with a partnership of Fernandinho and Fernando in front of Kompany and Otamendi.

Together they closed down Rooney and anyone else who tried to run into the hole between City's midfield and defence.

United only caused City problems in the final 10 minutes, when Jesse Lingard hit the bar and Chris Smalling was denied by Joe Hart.

Until then, City's defence looked extremely comfortable - which is not something you expect to happen when you go to Old Trafford.