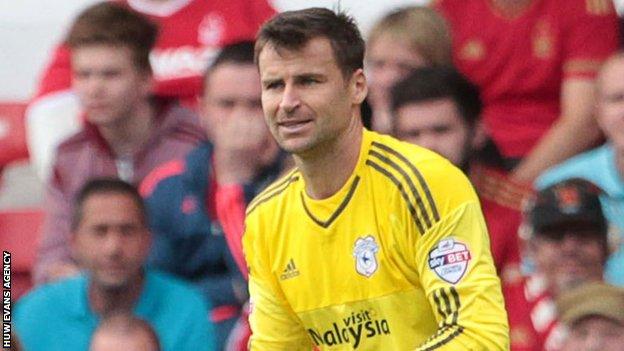 Cardiff City must be more consistent if they are to win promotion, says captain David Marshall.

The Bluebirds are eighth in the Championship after a goalless draw against Bristol City which leaves them three points off the play-off places.

Goalkeeper Marshall, a summer transfer target for West Brom, is committed to Cardiff and hopes to lead them back to the Premier League.

"It's a case of getting consistent. We need to improve," he said.

"I think we've got enough quality to get into the play-offs.

"It was the gaffer's [Russell Slade] aim at the start of the season as well, so I'm more than happy to be there and try and achieve that.

"We're disappointed we dropped points. In terms of trying to get promotion, those are the kind of games you need to win.

"It's good we're picking up points but we really need wins to get back up there."

Having beaten Middlesbrough in their previous outing, Cardiff could have moved to within two points of the automatic promotion places with victory against Bristol City.

But Russell Slade's side were underwhelming in the Severnside derby, and were indebted to several fine Marshall saves as they held on for a point.

West Brom tried to sign the Scotland international earlier this season, but the Premier League side failed to meet Cardiff's £5m asking price for the former Celtic and Norwich goalkeeper.

Although Marshall's excellent form may attract more interest when the transfer window opens again in January, the 30-year-old remains committed to Cardiff.

"I just take it as it comes. In the last couple of transfer windows there's been a lot of speculation," he added.

"Whatever happens, I'll just do what I do and get on with it."

Manager Slade stressed Marshall's importance to his side cannot be overstated, saying: "Not only is he a very good keeper and a class act, he's a very good bloke and a good leader of men.

"He's a wonderful ambassador for this football club."