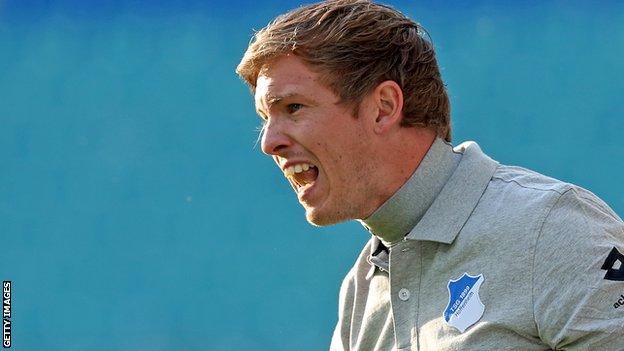 Hoffenheim have chosen their Under-19s coach Julian Nagelsmann as manager for next season - when he could become the youngest ever Bundesliga head coach.

Markus Gisdol was sacked on Monday, with former Stuttgart boss Huub Stevens appointed until the end of the season.

Nagelsmann, 28, will remain U19s coach, taking up his new post in the summer.

"This is a courageous step but we see in Nagelsmann such a huge coaching talent that we want to give him a chance," director Alexander Rosen said.

He has been given a three-year deal but is still studying for his senior coaching licence.

Hoffenheim are currently in 17th place in the Bundesliga, with one win and six points from their first 10 games of the season.

Provided the club stays in the division, Nagelsmann will become the youngest head coach ever to helm a side in the German top flight.