Jose Mourinho insists he is not concerned about his future as Chelsea manager as he looks to revive their season.

The defending Premier League champions are 15th in the table and have won three league games this season.

"I don't spend one second of my day thinking about it."

He added in his pre-match media conference: "It looks like you want to put a lot of pressure on me in relation to that, where you can't do it. You can't do it."

Reports have suggested the 52-year-old could lose his job if the Blues are beaten by Liverpool on Saturday.

But Mourinho refused to comment on whether he has received reassurances from Chelsea's board and owner Roman Abramovich about his future.

Asked if he had been given a guarantee, Mourinho replied: "I don't have to tell you."

'I don't belong to this world'

In August, Mourinho signed a four-year contract extension until June 2019, but Chelsea have suffered the worst title defence since the Premier League began and have lost half of their 10 league games this season.

Abramovich has previously dismissed managers when Chelsea's place in the Premier League's top four and qualification for the Champions League the following season had been in doubt. 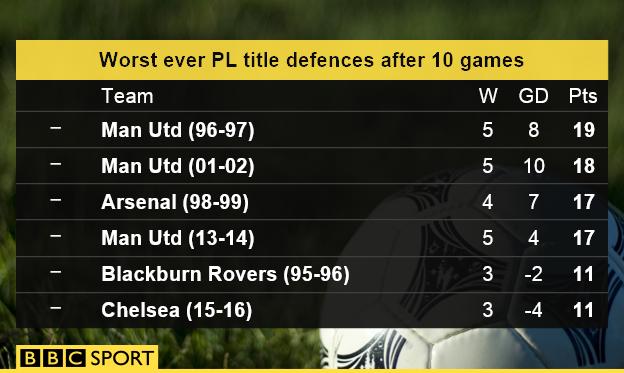 The Portuguese said he failed to understand the clamour for a manager to be removed from his position, using the example of Brendan Rodgers at Liverpool.

"What I would like to understand is why some people can be so excited and happy with the perspective of somebody losing his job," he said.

"It's sad. The Brendan situation - he was almost winning the Premier League. He was the manager of the season. He won the award from Barclays, the managers' association and everything.

"And suddenly, you (the media) were really happy and working hard until he was sacked. It's strange.

"I don't belong to this world. I'm too much emotional. I hate people losing jobs. Not in football, in everything."

Boss Jose Mourinho says he "cannot promise" that Chelsea will qualify for the Champions League next season.

He said: "Chelsea is a big club. It's the club that I choose to come to. It's a club I live in a very specific way every day.

"Liverpool is a big club, Manchester United is a super big club. Last season Liverpool win nothing and didn't qualify for the Champions League."

Mourinho also declined to comment on two disciplinary matters hanging over him.

The former Real Madrid and Inter Milan boss had until Thursday evening to respond to a misconduct charge relating to his half-time dismissal by referee Jonathan Moss at West Ham.

Mourinho expects his appeal against a £50,000 fine and suspended one-match stadium ban for comments made about referee Robert Madley following the October 3 loss to Southampton to be heard on Friday.

"I think so," he said. "Not optimistic, not pessimistic - just wait."