Jamie Vardy scored for a ninth successive Premier League game as Leicester beat Watford to go level on points with Manchester City and Arsenal at the top of the table.

Vardy got Leicester's second from the spot, converting after he was tripped by Watford goalkeeper Heurelho Gomes.

A Troy Deeney penalty gave Watford hope, but Leicester closed it out.

It was arguably harsh on the Hornets, who had the better of the first half.

Still, a seventh win of the season took Leicester behind the top two on goal difference alone. Needing a remarkable escape from relegation last season, their 25 points from 12 games is as many as they managed in their first 31 last term.

Fox in the box 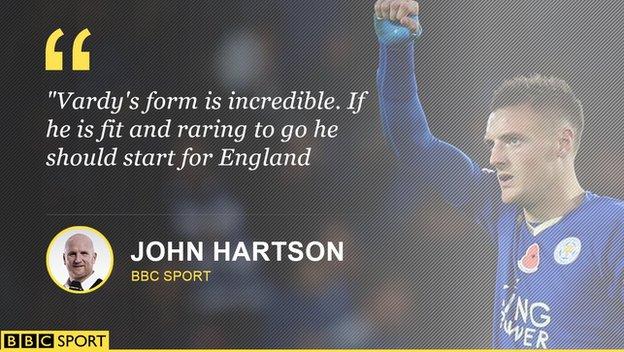 Vardy had been kept quiet by an organised Watford defence in the first half and was even the subject of an injury scare after Leicester took the lead.

Jumping to control the ball with no other player around him, Vardy landed awkwardly and was in discomfort as he lay on the ground, holding his groin.

However, after receiving treatment, he produced a moment typical of his stellar season.

Running clear of the Watford defence, he latched on to a through ball and was only stopped by a clumsy challenge from the onrushing Gomes. Vardy, handed the ball by regular penalty-taker Riyad Mahrez, smashed the resulting spot-kick high into the net.

Only Ruud van Nistelrooy, with 10, has scored in more successive Premier League games than Vardy, who is part of the England squad for the upcoming friendlies against Spain and France.

Though Watford were under pressure from an improved Leicester display at the beginning of the second half, they were ultimately only undone by the mistakes of their goalkeeper.

Gomes, so impressive so far this season, inexplicably gifted the hosts the lead with a comical error that gave Kante his first goal for Leicester.

The midfielder showed good skill inside the area, wriggling away from three defenders, but could only manage a tame shot. Still, Gomes allowed the ball through his hands, under his body and into the corner of the net.

Then, as Vardy ran through, Gomes was hasty in charging off his line. The Leicester striker was on the very edge of the 18-yard box when he was needlessly brought down.

Leicester, arriving on the back of a four-game unbeaten run, were stifled in the first half by Watford, themselves buoyed by wins against Stoke and West Ham.

Central defenders Miguel Britos and Craig Cathcart dealt with Vardy and Riyad Mahrez, while the visitors, who had the majority of possession, could have taken the lead, only for Odion Ighalo's shot to come back off the post.

But as Leicester once again improved after the break - 17 of their last 19 league goals have come in the second half - Ighalo and strike partner Deeney saw increasingly less of the ball.

And even though Deeney gave Watford an unexpected lifeline from the spot after Juan Carlos Paredes was tripped by Kante, the Hornets did not come close to an equaliser.

After the two-week international break, Leicester go to Newcastle on Saturday, 21 November, when Vardy will look to score for a record-equalling 10th successive game. Watford entertain Manchester United in that day's early kick-off.

Leicester manager Claudio Ranieri: "We could not have imagined this, but it is only November. It's not May. We still have to achieve 40 points first.

"Jamie is fantastic. He'll be fit for England. After the goal he continued to run and fight - he's OK.

"It is important to continue the momentum. It's not easy for us, but we are very ambitious."

Watford manager Quique Sanchez Flores: "We have to accept that there are accidents in football sometimes.

"Huerelho knows he has out support, it is they style of this team. He feels he is guilty, but the rest of us don't feel that way. We are really happy with his performance in general.