Substitute Kieran Gibbs rescued a point for Arsenal in a pulsating north London derby against Tottenham.

Spurs dominated for long periods and took a deserved first-half lead when Harry Kane broke clear and slotted in.

However, Arsenal slowly took control in the second half and equalised when Mesut Ozil provided a deep cross for Gibbs to bundle past Hugo Lloris.

Arsenal are level on points with Manchester City at the top of the Premier League, while Spurs lie fifth.

Analysis: How Ozil got Arsenal out of jail

Though the visitors were denied an impressive victory, Mauricio Pochettino's side remain unbeaten since the opening day of the season and are within three points of a Champions League place.

On the evidence of this performance, they are credible contenders to finish in the top four.

They have developed into a highly efficient unit who press the ball well from a solid base, while their attacking trio of Dele Alli, Christian Eriksen and Harry Kane appears capable of breaking down the meanest of defences.

Arsenal were beaten 5-1 by Bayern Munich in midweek, and their defensive frailties were highlighted by Tottenham's opener.

Spurs left-back Danny Rose played a ball inside the channel and, after Laurent Koscielny had stepped up, Kane nipped in front of Per Mertesacker before applying a composed finish.

Spurs unlocked Arsenal on numerous occasions and Cech made a particularly good save from Toby Alderweireld's header, while Kane and Eriksen flashed shots wide of goal.

Arsenal failed to register a shot on goal until the 38th minute - their previous worst at home this season was the eighth minute - but they did grow in confidence and composure as the game wore on.

Mathieu Flamini replaced Santi Cazorla at half-time as Arsenal attempted to stifle the threat of Alli in particular, and it worked well for the Gunners.

As Spurs began to tire, striker Olivier Giroud went close with two headers - one hitting the bar and the other rolling just wide - before Gibbs got in front of Kyle Walker at the back post to level. 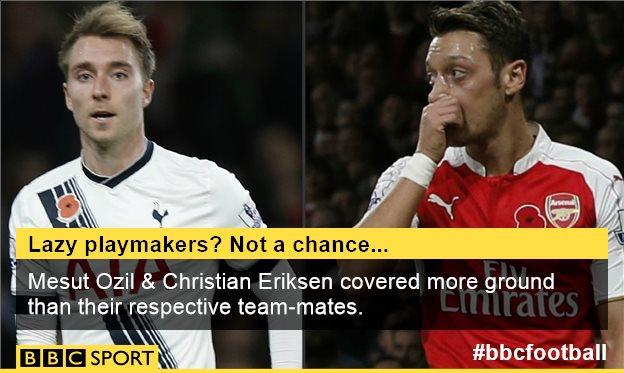 Only Bournemouth covered more ground than Tottenham over the weekend, with Spurs running a collective 7km more than Arsenal.

It could be argued, however, that the visitors did tire with their possession dropping to just 31.4% in the final 15 minutes compared to 58.6% in the final five minutes of the first half.

Arsenal did always look a threat going forward, once they shook off their early lethargy, and Ozil became the first ever player to contribute an assist in six consecutive Premier League games in the same season.

The Germany World Cup winner also became the first player to assist 10 goals in his opening 11 games of a Premier League season.

Arsenal manager Arsene Wenger: "In the second half we showed the mental strength of a side determined not to lose the game. In the end I think it's a good 1-1.

"Kieran Gibbs' movement is good. His timing in the box is good. Sometimes when he gets into a position he doesn't believe he can score.

"What this championship shows is that you have to fight 200% in every game for a result, you've seen that in all the games today. It shows it will be down to the team that can find the mental resource in every game."

Tottenham boss Mauricio Pochettino: "The way we played we should feel very proud. The effort was brilliant. The level we showed and the commitment was fantastic. It's the way we want to carry on.

"In six days we've played three matches, maybe we felt it in the final minutes. We need to recognise we are a very young team. This experience is very important.

"We need to show we are maturing. The level we have today is good, we need to show more and to improve. It's early to set a limit or to expect a lot of things."

Arsenal visit West Brom and Norwich in the Premier League after the international break, while Tottenham have home London derbies against West Ham and Chelsea to look forward to.