Robbie Savage thanked John Terry after the Chelsea captain said he was not willing to take criticism from the former Wales midfielder because he had played "at a really bad level".

Terry has won 14 major honours in his career, including the Champions League and Premier League, while ex-Leicester player Savage, 41, won just one.

'I take criticism from the very best'

Terry was speaking in the build-up to Chelsea's Champions League group game against Dynamo Kiev at Stamford Bridge on Wednesday.

The Blues skipper backed manager Jose Mourinho and his team-mates, despite nine defeats in 17 games this season.

The Premier League champions are 15th in the table, 14 points behind leaders Manchester City.

They are also out of the League Cup, and defeat on Wednesday would leave them with a difficult task of progressing in the Champions League. 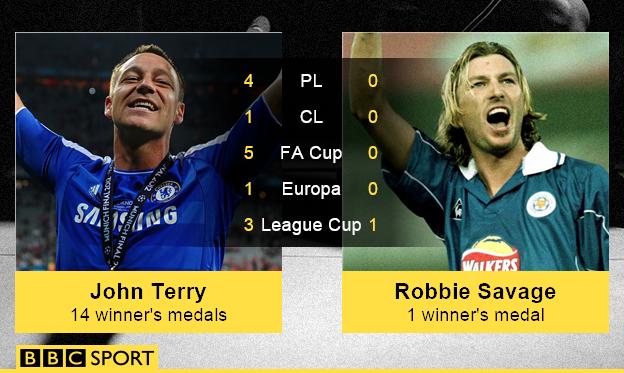 Terry and Savage faced each other 10 times in the Premier League, with Terry victorious in nine and one draw. Savage, though, did score for Birmingham in a 3-1 defeat by Chelsea in 2003.

Terry said: "I have come under criticism from players I have looked up to and take it on the chin - Rio Ferdinand, Gary Neville and Jamie Carragher.

"When certain other people speak, maybe I don't listen. Players who have played at a really bad level, who haven't had a career - Robbie Savage being one.

"He has dug me out a couple of times. I take it from the very best, other people - no."

Tweets containing the name were retweeted as far afield as Bandung in Indonesia.

Chelsea's tweet below retweeted 12,000 times. The club's previous tweet - about Terry not wanting to lose matches - was retweeted 600 times.

BBC Sport presenter Dan Walker said Savage had a right to have his say:

Comedian Jack Whitehall made a cheeky reference to Savage's performance on Strictly Come Dancing in 2011.