It is no surprise that Bayern Munich have three players in the Champions League team of the week after their superb display in the 5-1 win at home to Arsenal.

Germany forward Thomas Muller weighed in with two goals, and Barcelona duo Neymar and Luis Suarez join him in attack after scoring in their win over BATE Borisov.

For the second matchweek running there is just one Premier League player in the XI, with Manchester City midfielder Fernandinho celebrating his part in the win in Seville which saw City into the last 16. 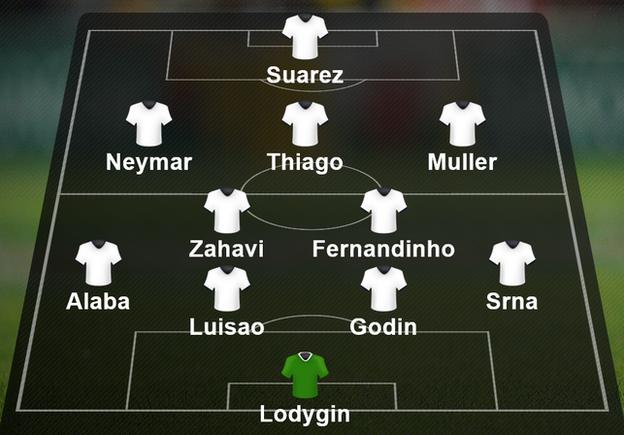 Zenit St Petersburg remain the only side in the Champions League with a 100% record and Andre Villas-Boas' side qualified for the last 16 with a 2-0 win in Lyon. Goalkeeper Yuri Lodygin has only been beaten four times in four games this season.

Free-kick specialist Darijo Srna was again in top form as Shakhtar kept up their hopes of qualifying from Group A with a much-needed 4-0 win at home to Swedish side Malmo. However, Donetsk face the daunting task of needing at least four points from games against Real Madrid and Paris St-Germain to have any chance of reaching the knockout stages.

Benfica are top of Group C after a third win in four games and Luisao got the winner as they beat Galatasaray 2-1.

Atletico centre-back Diego Godin was a pillar of the side which came so close to winning the Champions League in 2014 and the Uruguayan has been in superb form again this season. Godin's side were held to a goalless draw in Astana and remain in contention for a place in the last 16.

Left-back David Alaba often plays in central midfield for the Austrian national team and showed his quality with a superb goal against Arsenal from just outside the penalty area. He also made a crucial tackle as Nacho Monreal threatened late on.

Maccabi Tel Aviv are bottom of Group G after Porto condemned them to a fourth defeat in four games. Eran Zahavi grabbed their first goal of the campaign from the penalty spot against the Portuguese giants.

Manchester City qualified for the last 16 with a superb attacking display in the 3-1 win against Sevilla and midfielder Fernandinho added the crucial second goal with a header after Wilfried Bony's shot was blocked.

Bundesliga leaders Bayern Munich have not qualified for the knockout stages yet but kept up their record of averaging five goals per home Champions League game with a superb display against Arsenal. Former Barcelona man Thiago created four chances on the night.

Barcelona edged closer to the last 16 with a 3-0 win at home to BATE Borisov, with Uruguay striker Luis Suarez scoring one and making another for Neymar.

Neymar made sure that Barca continue to thrive, despite the ongoing injury to star player Lionel Messi, with two goals in the win over Borisov. The Brazilian had four shots on target and created six chances for his team-mates.

Thomas Muller made it four goals in six games against Arsenal with a pair of clinical strikes in the Allianz Arena. Team-mate Robert Lewandowski may have stolen the headlines this season with his run of form but Muller now has 20 goals for club and country this season.