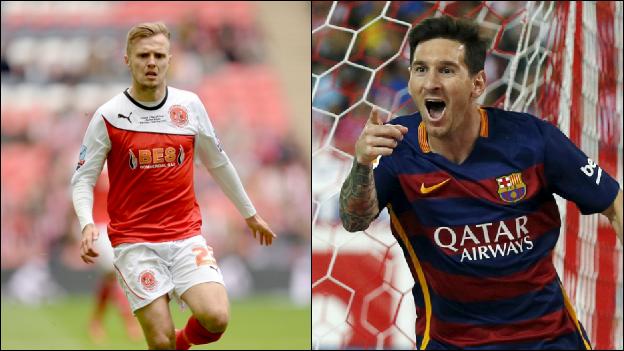 David Ball of League One Fleetwood Town and Barcelona's Lionel Messi are among the 10 nominees for Fifa's "most beautiful" goal of the year award.

Ball, 25, showed superb close control before delicately chipping over the goalkeeper and into the top corner from 20 yards against Preston in March.

The only other Englishman shortlisted for the Puskas Award was Manchester United's Wayne Rooney in 2010.

USA's Carli Lloyd is also in the running for her Women's World Cup goal.

The first winner was Cristiano Ronaldo for Manchester United against Porto in 2009.

The award is named after legendary Real Madrid and Hungary striker Ferenc Puskas and the period for this year's prize is from 27 September 2014 to 23 September 2015.

Fifa's description of Ball's strike read: "Not only did David Ball demonstrate some fine footwork with a few clever touches on the top of Preston North End's box, but his equalising goal was just as talented as his fast feet.

"After receiving the ball with his back to goal, Ball turned and with three touches in the tightest of spaces, he created enough space for himself to lob the goalkeeper with a clever chip that settled into the far corner."

Ball, who began his career at Manchester City but never made a senior appearance for them, told the Fleetwood website. "It's great for that goal to even be put in the same bracket as the ones which have been shortlisted, I'm absolutely delighted.

"I'm obviously shocked to have been shortlisted and it's a great thing for Fleetwood Town Football Club and myself.

"The likes of Carlos Tevez and Lionel Messi are people I love watching. To be in the same category as them is something I'll cherish forever."

Pajtim Kasami, then of Fulham, was nominated for last year's award, which was won by Colombia's James Rodriguez for his goal against Uruguay in the World Cup.

Republic of Ireland striker Stephanie Roche was second for her spectacular volley for Peamount against Wexford in the Irish top flight.

Fifa and several football committee members chose the list, with fans now voting for the award. The winner will be revealed on the day of the Ballon d'Or on 11 January 2016 and voting will close during the show.