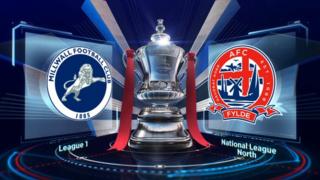 The Lancashire outfit performed manfully against League One Millwall, but went behind 10 minutes after the interval when Aidan O'Brien fired home.

But Steve Morison put victory beyond doubt when he converted from a swift counter, to help Millwall reach the second round.