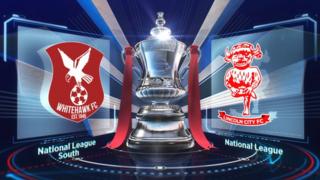 National League South side Whitehawk secure a place in the FA Cup second round for the first time as they beat Lincoln 5-3 despite Matt Rhead's hat-trick.

Danny Mills put the hosts ahead and Jake Robinson made it 2-0, but Rhead scored a penalty after a foul by Mills.

Sam Deering curled in Hawks' third and Rhead hit Lincoln's second from close range but Dave Martin made it 4-2.

Rhead sealed his hat-trick but Deering made it 5-3 from the spot after he was fouled by Alan Power, who was sent off.