Arsenal got absolutely battered for most of Sunday's 1-1 draw in the north London derby against Tottenham - their fans must have been wondering what was happening, because it was embarrassing at times.

The Gunners were extremely poor and were outplayed for long periods at home, but they still picked up a point and actually created enough chances to win the match because of the brilliance of Mesut Ozil.

I would not even say Ozil had a particularly good game but he got his side out of jail with his cross for Kieran Gibbs' equaliser.

Ozil had already provided two balls from a free-kick and a corner that Olivier Giroud should have scored from - he hit the bar with his first header and sent the second one wide.

Tottenham knew how dangerous he was because they stopped him from getting on the ball in open play until the final 15 minutes, but his magic touch was still able to rescue Arsenal from what would have been a very bad defeat. 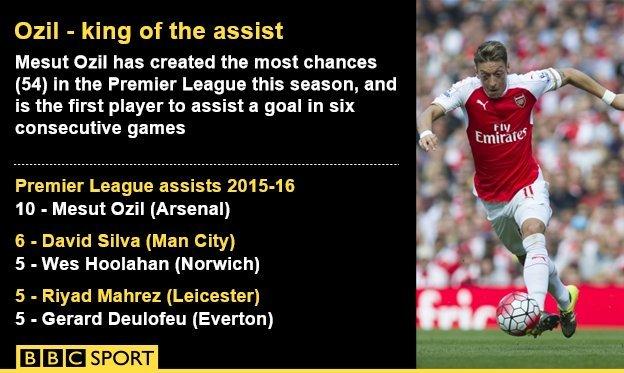 'Ozil spots space to do damage'

Ozil had already made 47 chances this season going into Sunday's game, the most in the Premier League alongside West Ham's Dimitri Payet. That works out at an average of almost five a game in each of his previous 10 appearances.

In the first half at Emirates Stadium, however, the German did not even have a sniff of creating an opening in open play.

That was because, from the off, Spurs had the perfect game plan. They identified Arsenal's best two players as Ozil and Alexis Sanchez and they stopped their supply at source, pressing high to stop the Gunners from building from the back.

Any time Ozil, Sanchez or Santi Cazorla did get the ball, they had two or three men on them straight away and they took them completely out of the game. Ozil dropped deep to get the ball and could not do any damage from there.

It was only in the last 25 minutes that Ozil began to get any time in possession in the Tottenham half, and he made it count.

I think he is at his most deadly when he picks up the ball when an initial attack has been cleared. The defence pushes up and Ozil is just waiting for them to do that so he can deliver it into the space they leave behind.

I have seen it happen time and time again and it was a similar story on Sunday when he picked up the ball and spotted Gibbs's run to the far post.

It was his 10th assist of the campaign, four more than anyone else, and he set a Premier League record for making a goal in six successive games in the same season.

'Ozil is not lazy, on or off the ball'

Some people still seem to have the perception that Ozil is lazy, or a luxury player, so it is worth highlighting again how hard he actually works.

He does more work for the Arsenal team than any other midfielder or forward bar Aaron Ramsey and covers a lot of ground right across the pitch.

I think it is easy to get the wrong idea because of his style on the ball. Someone like Alexis Sanchez looks busier because he does a lot of one-twos and plays with more urgency.

It is great to play it quick and early, either one-touch or two-touch like Sanchez often does, but there is nothing wrong with being different.

Ozil has the imagination to hold on to it a little bit longer because he knows the picture will change if the defence are anticipating a one-two or an early ball, and that might leave him some space.

So he is not lazy, either off the ball or on it. Even if he was, what he brings to the team means his team-mates would not mind.

When I was in Tottenham's midfield with Rafael van der Vaart, or a few years earlier when we had Dimitar Berbatov up front, I was prepared to work harder just to get the ball to them - Rafa would create a lot of chances every game and Berba would stick a lot away.

It was not just me. The whole team were prepared to do more work than them because, collectively, we knew those players were going to win us games.

The really brilliant thing about Spurs for most of the match was that they did not allow him into the game, and it was one of the reasons Arsenal found it so difficult to get going.

'Close to a complete performance by Spurs'

I played in 11 north London derbies for Spurs and I would have been devastated walking off the Emirates pitch with only a point on Sunday.

Tottenham completely dominated, but Arsenal were always going to get at least one chance. I always felt Spurs would need that second goal, and so it proved.

It was so close to being a complete performance from Mauricio Pochettino's side - in terms of their pressing, their aggression and their creativity it was absolutely spot on.

The only thing they were lacking was a killer instinct when they were 1-0 up and creating further chances. They need to be able to put those kinds of games to bed when they have bossed them.

Pochettino will be hugely disappointed to only draw the game but it was still a massive statement of intent by his team.

Everyone at the club will want to stay under the radar so they probably will not appreciate me saying this on Match of the Day 2, but I am certain they will finish in the top four this season.

A lot of that is down to Pochettino's training methods and his willingness to use young players. It means they have got energy and pace all over the pitch. They look as fit and strong as any team I have seen this season.

Defensively they look solid - the only worry they had earlier in the season was over Harry Kane's form, but now he is banging in the goals again.

Spurs have been getting better every week and it looks to me like they are close to the peak of their powers. They deserve to be in the top four.