Swansea City have parted company with manager Garry Monk after one win in 11 Premier League games.

The 36-year-old had been with the club for over 11 years, first as a defender and then manager since February 2014, when he replaced Michael Laudrup.

Saturday's 3-0 home defeat by Leicester City was his last game in charge, and left them 15th in the table.

"The decision has been made very reluctantly and with a heavy heart," chairman Huw Jenkins said.

Listen: 'Swansea players must 'look at themselves in mirror'

He added in a club statement: "To find ourselves in our current situation from where we were in the first week of September, and considering the drop of performance levels and run of results over the last three months, it has brought us to this unfortunate decision.

"We hope to appoint a replacement as soon as possible."

Alan Curtis, the former Swansea player and long-time coach at the club, is expected to be in charge of the team for Saturday's Premier League match at Manchester City.

Monk had guided the Swans to a highest ever Premier League finish of eighth in his first full season.

They started this season in similar form, drawing at champions Chelsea on the opening day before beating Newcastle United and Manchester United at home in an unbeaten four-match start.

But Swansea's form then deteriorated as they lost four of their next six games.

An away victory over Aston Villa at the end of October interrupted the winless run, but the pressure intensified on Monk as his team picked up only one point in their next five games.

The 1-0 loss to Liverpool at Anfield was hailed by Monk as "an excellent" performance, but Saturday's comprehensive defeat by shock Premier League leaders Leicester resulted in his departure. 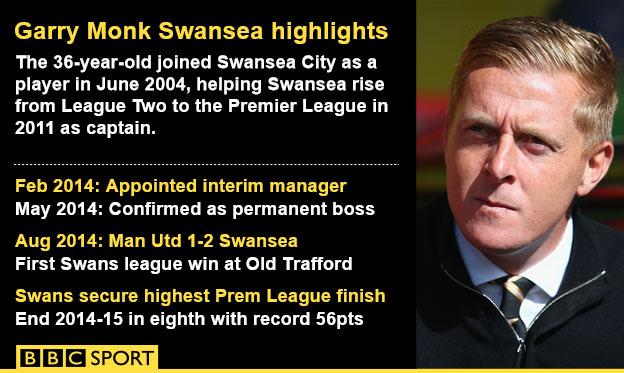 Jenkins said the club had to act given the team's loss of form since August, and in spite of Monk's impressive track record.

"Garry took on the job 22 months ago with the backing of everyone at the club," added Jenkins.

"And when you take into account the excellent campaign we had last season when we broke all club records in the Premier League, nobody foresaw the position we would be in at this moment in time.

"Bearing that in mind and the current uncertainty around the club, we felt the situation needed clarity to move forward.

"It was not a decision we took lightly, especially given Garry's history and standing within the club.

"And it goes without saying that we wish Garry all the very best for the future and thank him for his tremendous service, not only as a player over the last decade, but also as our manager. He will always have a warm welcome at this football club."

Rodgers left the Liberty Stadium for Liverpool in June 2012, and is currently out of a job having been replaced at Anfield by Jürgen Klopp in October.

Former Everton and Manchester United boss David Moyes is also in the running, although he has previously distanced himself from the job.