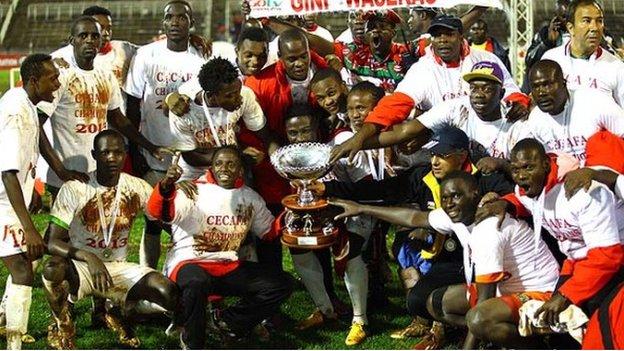 Sudan and South Sudan are set to play each for the first time ever at November's Cecafa Senior Challenge Cup.

The neighbours have been drawn in Group C for the regional East and Central African championship in Ethiopia.

South Sudan began playing international football in 2012, competing at Cecafa that year as well as in 2013 also.

Champions Kenya face 13-time winners Uganda in Group B, while Ethiopia open the tournament against Group A rivals Rwanda in Addis Ababa on 21 November.

Guest side Malawi and Djibouti are the other teams in Group C, Tanzania and Somalia feature in Group A while Burundi and Zanzibar complete Group B.

As well as Addis, games are set to be played in Hawassa and Bahir Dar.

One side that is not taking part is Eritrea with Nicholas Musonye, the Cecafa secretary general, explaining this was due to their ongoing political tensions with hosts Ethiopia.

Eritrean players have also sought political asylum on several trips to play overseas. most recently for a World Cup qualifier in Botswana.

Kenya's Harambee Stars won the last tournament on home soil in 2013 with a win over Sudan in the final.

The regional tournament was not held last year after Ethiopia withdrew from hosting the event.