While most teenagers are at school, AC Milan goalkeeper Gianluigi Donnarumma is helping keep clean sheets in Serie A.

At just 16 years old the youngster is already being tipped by his coach Sinisa Mihajlovic as the "future of Italian football".

Donnarumma has started the last four games for the Rossoneri and his rise to fame has been so great that the youngster does not even merit a profile on football video game Fifa 2016.

On Saturday he faces Juventus and his idol, Italy legend Gianluigi Buffon.

Before the game BBC Sport takes a closer look at the 6ft 5in shot-stopper.

Donnarumma was born in Castellammare di Stabia on 25 February 1999.

The story goes that Donnarumma was so big for his age that his mother would bring a birth certificate along to every game to show opposition teams who thought he was too old for the age group he was playing in.

He followed his brother into the Milan academy, but while Gianluigi went on to make his senior debut for the Rossoneri, older brother Antonio, also a goalkeeper, was sold to Genoa without ever playing in the famous red and black. 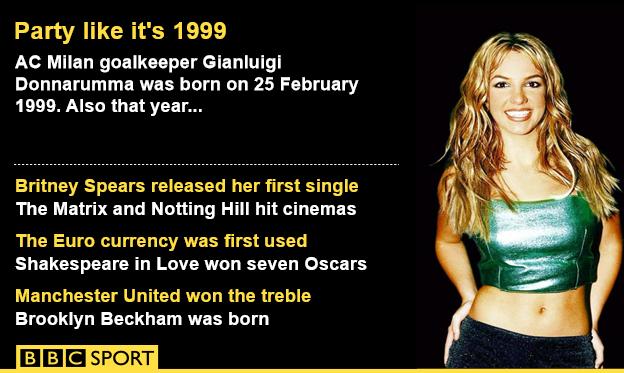 "I chose to come to AC Milan and not Inter partly because my brother played here and partly because I have always been a Milan fan. I always wanted to be a goalkeeper. I started on a pitch near my home and I never had any other dream."

His first contract was negotiated by super agent Mino Raiola, who counts Zlatan Ibrahimovic and Paul Pogba among his clients.

Former Milan manager Filippo Inzaghi named Donnarumma on the bench for a match against Cesena in February, days before his 16th birthday.

In pre-season the youngster was promoted to Milan's first team by Mihajlovic as a third-choice goalkeeper.

He was part of the tour to China and made his debut in a friendly against Real Madrid in August.

Replacing Diego Lopez in the 72nd minute, Donnarumma saved a penalty from German World Cup winner Toni Kroos in the shootout to send it to sudden death.

But he missed the decisive penalty as Milan lost 10-9 on penalties.

Just weeks into the new season Donnarumma made his Serie A debut, in a 2-1 win at home to Sassuolo on 25 October.

At 16 years and eight months he became the youngest debutant goalkeeper in the Italy top division, since Gianluca Pacchiarotti who played for Pescara aged 16 years and 192 days in 1980.

"The day before the Sassuolo match, the coach called me into the changing rooms. He gave a brief speech and he told me of his decision," said Donnarumma.

"It was an incredible feeling. At first, I didn't realise that he was going to select me. Usually, I keep my feelings inside, but that day it was very hard. After training, I called my parents right away and they left Castellammare to come and watch me."

Donnarumma went on to keep his place in the side, ahead of former Real Madrid keeper Lopez, who is now out with a knee injury.

In the last league game against Atalanta on 7 November, Donnarumma made three crucial saves to earn Milan a point in a 0-0 draw, their first clean sheet of the season.

His performances have seen him earn a call-up to Italy under-21s.

When Donnarumma takes to the field against Juventus on Saturday, at the other end of the pitch will be 37-year-old Buffon.

"Buffon is my idol," said Donnarumma. "My dream is to become a regular in the senior national team and follow in his footsteps. Everyone would like to have a career like his."

Buffon's career began almost exactly 20 years ago, when the then 17-year-old made his debut for Parma against AC Milan on 19 November 1995.

He has gone on to win 154 caps with Italy, the World Cup and is considered one of the best goalkeepers of all time.

Does Donnarumma think he can reach the heights of his idol?

"I do not know if I was destined as many say," he added. "I definitely keep my feet on the ground."

'Italy does not produce such big players'

Italian football writer and broadcaster Mina Rzouki: "Donnarumma is exceptionally big for his age with a huge wingspan and is agile for someone of his size. Italy does not usually produce such huge players.

"He is a well adjusted boy with a great family set-up and is very level headed. He is devoted to the art form of becoming a goalkeeper and that makes all the difference. He is not just talented, he has the right mindset and never gets flustered.

"He has appealed to two coaches in Inzaghi and Mihajlovic which says a lot about his character, he is highly rated and a model professional. To keep a player like Lopez out of the team means he must be something special.

"His weaknesses are crosses and his positioning, he has had made mistakes and been inconsistent but Mihajlovic has stuck with him regardless and put faith in him."