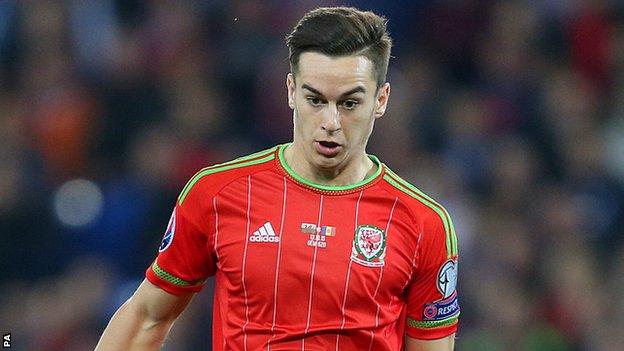 Wales' young forwards have a chance against the Netherlands to prove they can provide a "natural goalscoring instinct", says Malcolm Allen.

Tom Bradshaw and Tom Lawrence could feature in Friday's friendly in Cardiff in the absence of other strikers.

Walsall's Bradshaw is in the squad for the first time, while Lawrence - on loan at Blackburn Rovers - has one cap.

"For every door that closes there is another door that opens," said former Wales striker Allen.

Bradshaw, 23, is Walsall's top scorer this season with nine goals and has earned his first international call-up.

Simon Church is the other striker in a squad already without forwards Gareth Bale (rested) and Hal Robson-Kanu (ankle) before Sam Vokes (groin) pulled out on Wednesday.

Fulham's George Williams, who won the first of his five caps in a friendly against the Netherlands in 2014, has been called up as Vokes' replacement.

Allen, who scored three goals in 14 internationals, says the friendly against the Dutch at Cardiff City Stadium will be an opportunity for manager Chris Coleman to experiment.

"Tom Bradshaw has got a natural ability to score goals and he is on the move in the box every time the ball comes into it and we've been missing that.

"The level is totally different but you don't know how good you are until you are challenged as a player.

"Tom Lawrence did really well when he came on against Andorra."