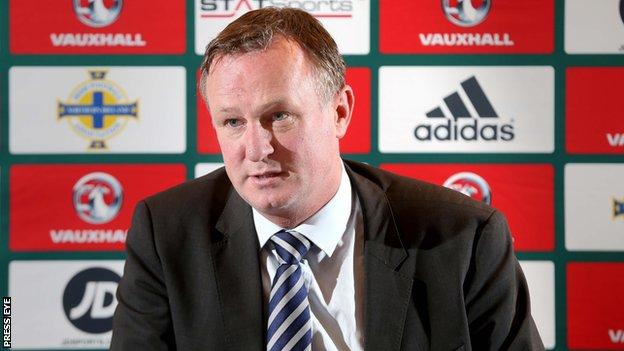 Northern Ireland boss Michael O'Neill has urged his players to seize their opportunities to impress ahead of next summer's Euro 2016 finals in France.

His side face Latvia on Friday in the first of five proposed friendlies prior to the tournament and places in the final 23-man squad are up for grabs.

"People who are in the squad but aren't in the team have to prove they deserve a place," said O'Neill.

"Either by what they do at their club or how they do when they come here."

"I can only put 17 on the pitch on Friday night and I'll have two games in March but I'm not big on just changing the team for the sake of it."

Twenty-three players are on duty in Belfast this week but with Chris Brunt injured, Aaron Hughes staying with Melbourne City this week, and a handful of other recent squad members also hoping for another chance, there are some hard calls ahead.

O'Neill is likely to prioritise game time for those who have been sitting out for their clubs in recent weeks, and may even consider another look at the 3-5-2 formation he has used previously, but he has no intention of awarding cheap caps.

"The regular players want to play and they deserve to play.

"It's not a case of giving someone a shirt - they have to take that off the person who is playing.

"Sometimes that can happen through injury. We're deprived of Chris Brunt for this game so we'll look at that scenario at left-back and there's a chance for someone to stake a claim.

"It is very much about players taking their chance."

O'Neill has emphasised that every training session will count between now and June next year, when Northern Ireland will make their first appearance at a major finals since 1986.

"Every session we have is important to these players because the time we spend with them is so limited."