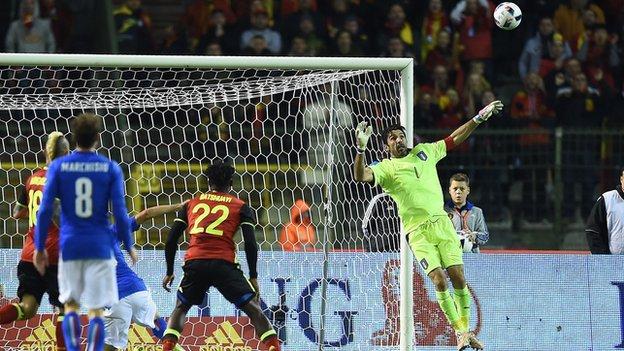 Kevin de Bruyne and Jan Vertonghen both scored as Belgium came from behind in Brussels to end a run of 12 successive defeats against Italy.

Antonio Candreva put Italy ahead in the third minute but Tottenham's Vertonghen headed an equaliser and Manchester City winger De Bruyne lobbed in the second.

There was a minute's applause in memory of the 39 fans who died before the 1985 Liverpool-Juventus European Cup final.

Belgium went into the game as the number-one ranked team in the world and enhanced their billing as one of the favourites for Euro 2016 next summer with an impressive performance.

The home side fell behind after three minutes when Liverpool keeper Simon Mignolet saved well from Southampton striker Graziano Pelle but was beaten by Candreva's follow-up.

But Vertonghen headed the equaliser from a De Bryune corner 10 minutes later, his first goal of the season.

Belgium were missing injured Manchester City captain Vincent Kompany but went ahead in the 74th minute when City team-mate De Bruyne lifted the ball over Italy keeper Gianluigi Buffon after he had saved from Batshuayi.

Substitute Batshuayi then completed the scoring from close range seven minutes from the end.

Belgium coach Marc Wilmots said: "The spirit of the group is perfect. Collectively we kept our cool, came back, and won."