Sunderland claimed their first away win of the season as Jermain Defoe's goal earned them victory at Crystal Palace.

The game seemed to be heading towards a draw, but in the 80th minute Defoe nicked the ball from the indecisive Scott Dann and poked in.

Prior to that, Sunderland had the best chances, defender Sebastian Coates going closest when his header was cleared off the line by Yohan Cabaye.

The win moved the Black Cats up one place to 18th in the Premier League table on nine points, one behind north-east rivals Newcastle. Palace remain 10th on 19 points.

Patience a virtue for Black Cats

The goal eventually came as a result of Yannick Bolasie losing control of the ball in midfield as he tried to perform another trick, and team-mate's Dann's ambling at the back.

The hard-working Defoe, who fired wide in the first half, chased down the Palace defender, pushed the ball past keeper Wayne Hennessey and slotted in.

It was his seventh goal of the season, and underlines his importance to the club despite recent reports suggesting he might leave in January.

Sunderland manager Sam Allardyce said: "He is a classy finisher. If you want somebody to chase down what looks a lost cause [it is him].

"Defoe not giving up is why the defender and the goalkeeper messed up."

Prior to the match both managers stated how Sunderland would set up at the back - Palace boss Alan Pardew said it would be five while Allardyce said he would pick four.

For a manager whose side conceded six goals against Everton in their last away outing, his conservatism was understandable, especially against the potent and pacy attack of Palace.

The tactic worked. Palace had plenty of possession but their attacks - led by Wilfried Zaha and Bolasie - often broke down around the area, and balls that found their way into the box were cut out by Sunderland's three centre-backs.

However, the graphic does not tell the full story. The Black Cats were dangerous on the counter-attack and looked far fitter than they did in the 6-2 loss at Goodison Park, catching Palace out on the break on several occasions.

If Steven Fletcher, Defoe or Patrick van Aanholt had provided more assured final touches, Sunderland would have been ahead in the first half.

This was only Sunderland's second clean sheet in 15 games in all competitions this season, following the 3-0 win over Newcastle in October.

"It was a good solid defensive performance," Allardyce said.

"Going five at the back was something that we thought about a lot. Palace have a real threat in Bolasie and Zaha and if we played wing-backs they would go tight and stop them working their magic.

"It is no coincidence - two clean sheets, two victories and a very, very valuable three points.

"We have been conceding on average three goals a game and that just has to stop.

"Hopefully the message is getting through to the players that we have to be resilient as a team, dig in and work hard out of possession."

It was also a good day for Allardyce on a personal level as he recorded his 150th win in the top flight. 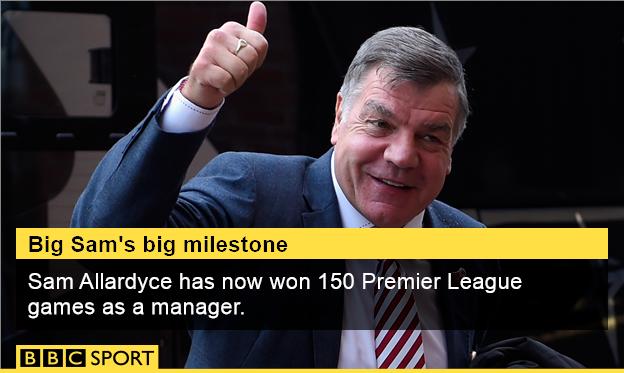 'Final pass let us down'

Pardew gave credit to Sunderland and their gameplan, but rued a lack of incisiveness in attack from his team.

"We got a lot of the ball, a lot of possession," he said. "Unfortunately we could not create a sweet moment tonight and things went the wrong way for us.

"Our crossing and final pass let us down. It was a simplistic game they played but they did it well.

"Dann tried to take Defoe and edge him out, but Defoe checked his run and got on the other side of him.

"Dann has been magnificent for us. We will have to pick ourselves up for Saturday."

Sunderland are at home to Stoke on Saturday, before facing Arsenal, Chelsea, Manchester City and Liverpool in December.