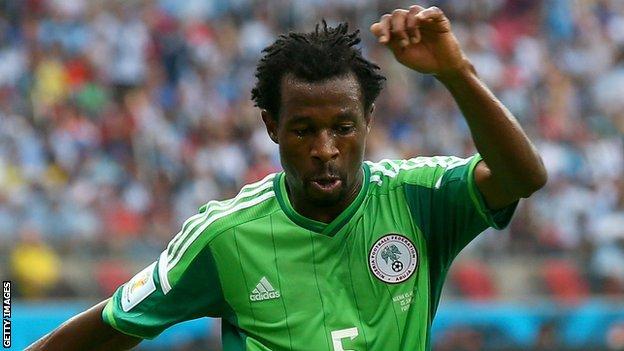 Nigeria scored twice at home to beat Swaziland 2-0 on aggregate and progress in Africa's qualifiers for the 2018 World Cup.

The Super Eagles were toothless in front of goal in the first leg, which ended 0-0, and needed 52 minutes of the return game to make the breakthrough.

Moses Simon fired them ahead, finally ending the resistance of a team they were expected to sweep aside.

A second goal was added by Efe Ambrose on 88 minutes before Swaziland had Phumlani Dlamini sent off when he was shown a second yellow card.

Another of the continent's heavyweights, Ghana, secured their passage in very similar fashion to Nigeria.

Having been held 0-0 to Comoros in the first leg, the Black Stars hit two goals without reply in the return match to go through 2-0 on aggregate.

And just as Swaziland ended their match with 10 men, so too did Comoros when Omar Mdahoma received a second yellow card with eight minutes remaining.

Egypt made the most of Chad's late arrival to win easily 4-0 to go through 4-1 on aggregate.

Chad only arrived at the Borg Al Arab stadium in 30 minutes before kick-off.

This after their flight from N'Djamena was delayed due to a row over player bonuses and then the condition of the plane they were using for the journey.

The Pharaoh's were 2-0 up inside 10 minutes with goals from Mohamed El Neny and then Abdalallah El Saied.

Portugal based Koka then headed home twice in the space of five minutes before half-time to put the game beyond doubt.

Cape Verde, fourth in the Fifa rankings for Africa, beat Kenya 2-0 to overturn a first leg loss and win 3-2 on aggregate.

Heldon Ramos, who is on loan at Portguese side Rio Ave, with both goals for the Blue Sharks.

Kenya had only arrived in Praia hours before the match after a lengthy flight from Nairobi following a delayed departure as players and the charter airline demanded to be paid before they would take off.

Mali were another side to overcome a first leg deficit winning 2-0 against visiting Botswana to make 3-2 overall.

Bordeaux's Cheick Diabate made it 2-2 on aggregate with a penalty after only 10 minutes of play Bakary Sako of Crystal Palace, gave the Eagles lead on the half hour mark.

Senegal were pushed all the way in the first leg by Madagascar but were better at home in Dakar with a 3-0 victory to make it 4-2 overall.

West Ham midfielder Cheikhou Kouyate gave the hosts the lead midway through the first-half with Moussa Konate scoring the second eight minutes after the break.

Mame Biram Diouf, who scored in the first leg, made sure of the win with eight minutes remaining.

Tunisia eased past Mauritania with a second 2-1 win, to make it 4-2 overall.

Defender Syam Ben Youssef gave the hosts the lead early in the second half before Moulaye Ahmed 'Bessam' Khalil gave Mauritania hope with an equaliser.

Substitute Saad Bguir, who plays for local club Esperance, sealed the victory for the hosts.

African champions Ivory Coast were convincing 3-0 winners over Liberia in Abidjan to complete a 4-0 aggregate win.

Striker Giovanni Sio, who plays for Rennes in France, scored twice before half-time.

While Nice midfielder Jean Michel Seri was also on target for the Elephants.

Burkina Faso overturned a first leg deficit against Benin with a 2-0 victory in Ouagadougou.

Jonathan Pitroipa was on target from the penalty spot before Chelsea's Bertrand Traore completed the comeback and send the Burkinabe through 3-2 on aggregate.

Napoli's Faouzi Ghoulam then scored the first of his two goals with a superb freekick from outside the area, he also scored from the penalty spot after the break.

Tanzania had to play the whole of the second half with 10 men after Mudathir Yahya was dismissed for a second bookable offence after 41 minutes.

Moments later Riyad Mahrez, of Leicester City, made it 3-0 at half-time.

Islam Slimani, who scored the goals to secure a 2-2 draw in the first leg, grabbed another brace in the second half including a penalty.

Carl Medjani was also on the scoresheet as the Algerians won 9-2 on aggregate.

South Africa needed an own goal to earn a narrow 1-0 win over visiting Angola in Durban.

Manucho Diniz was the unfortunate player who got the last touch on a corner to give Bafana Bafana the 4-1 aggregate win.

Libya were the first team on Tuesday to book their place in the next round after a 3-1 win in Rwanda gave them a 4-1 aggregate victory.

Khumaj put the visitors ahead in the second leg to put them in control of the tie.

Rwanda's Jacques Tuyisenge made it 1-1 on the day and offered his side some hope of a comeback but Libya pulled away thanks to a brace from Mohamed Ghanudi.

And Cameroon are through, despite being held to a 0-0 draw at home to Niger. The Indomitable Lions secured their passage in the first leg with a 3-0 win.

Congo finally emerged victorious after a fantastic tussle with Ethiopia, the Red Devils winning their second leg 2-1 to go through 6-4 on aggregate.

Ethiopia's Getaneh Kebede scored the opening goal of the second leg to level the tie at 4-4 on aggregate.

But Francis N'Ganga nudged Congo ahead overall when he made it 1-1 on the day and Thievy Bifouma's strike sealed his side's victory.

The final group stage begins next October, the 20 second-round qualifiers will form five groups of four teams with the winners of each group booking their place at the finals in Russia.