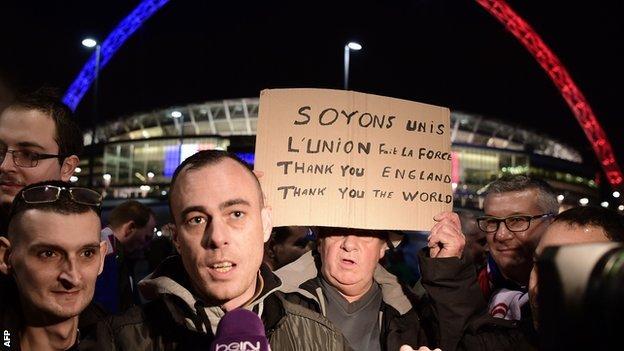 England and France paid tribute to the 129 people killed in Friday's attacks in Paris at an international friendly at Wembley on Tuesday.

A crowd of more than 70,000 sang La Marseillaise - the French national anthem - with the Duke of Cambridge and Prime Minister David Cameron present.

France's game with Germany at the Stade de France was targeted in the attacks.

But France chose to go ahead with Tuesday's game, which ended 2-0 to England, amid heightened security.

Before kick-off, flowers were laid at the side of the pitch by Prince William and the opposing managers, England's Roy Hodgson and Didier Deschamps of France.

The Football Association (FA) had encouraged England supporters to learn the words to La Marseillaise in a show of solidarity and Wembley's arch was lit up in the blue, white and red of the French flag.

Applause greeted the end of the anthems before a minute's silence was impeccably observed, with one side of the London stadium creating a Tricolor mosaic with coloured cards.

As the final seconds were played out, France's fans delivered a final rendition of La Marseillaise, which drew loud applause from England supporters.

A Belgian citizen has been identified as the mastermind of Friday's deadly attacks, and Belgium's friendly with Spain on Tuesday in Brussels was called off because of security fears.

Meanwhile, Germany's match against the Netherlands in Hannover was cancelled about an hour before kick-off. The stadium was evacuated and supporters sent home because of a "concrete security threat" and "plans for an explosion", according to police.

French security sources say that surveillance video shows a possible ninth assailant during the attacks - which have been claimed by the so-called Islamic State (IS) group.

Extra officers were on duty for the game, including armed police.

Prince William, president of the FA, decided to attend the match after Friday's attacks. London mayor Boris Johnson was also at Wembley.

After the match, Hodgson said: "It was a very poignant occasion. It was really everything I expected it to be."

His France counterpart Deschamps said they "felt grateful" for the "very heartfelt, special, moving, grandiose moment", adding: "We have had a moment of communal grief and this has been good for us."

He said: "There was a sporting meaning and a sporting dimension, but on a human level the match had far greater importance. We had desire and will but all things considered the human aspect was maybe more important tonight."

England captain Rooney said: "It was always going to be a difficult night for everyone, especially the French players and staff.

"For ourselves to be involved in this occasion was tough, the young players were excited but it was a difficult game for them. I thought both teams handled it extremely well. The fans were brilliant.

"Football is a global game and, as Didier Deschamps said yesterday, it is not about religion or race. We need to stand tall together in these tough times."

France and Tottenham goalkeeper Hugo Lloris said: "First of all we want to thank all the England people in the stadium for their respect.

"The performance was not there for us and we had a lack of aggressiveness and concentration. It was more about solidarity. Life is still going on so we need to carry on."

Marseille midfielder Lassana Diarra - whose cousin was killed during the attacks - came on as a substitute to a standing ovation.

He was joined from the bench by Atletico Madrid forward Antoine Griezmann, whose sister was in the Bataclan theatre where 89 people died, but escaped.

'You have to keep living your life'

Plenty of supporters made their way to Wembley early, waving both the French and English flags outside the ground.

One French fan, who was at the Stade de France on Friday, told BBC News: "Everyone's a bit afraid of leaving the house now, but you have to keep living your life and lots of people are in shock.

"There should have been nine of us here tonight but four chose not to come because their wives and families had persuaded them to stay at home."

An England supporter said: "We shouldn't change anything, we should be here because of the football and that's why we are here, and obviously to show a bit of solidarity with the French."

The hashtag #engvfra was trending from 17:30 GMT on Twitter in the UK, with the match also being discussed around the world in Europe, North America, Africa and Asia.

Daniel Woodley: "Those scenes at Wembley even brought tears to my eyes. Amazing how football can join together in times like this."

Sam Jenkins: "Football, so often a great divider. Not tonight. Quite spectacular to see and hear La Marseillaise ringing around Wembley."

Mark: "The football at Wembley tonight is what sport is all about. Bringing enjoyment to those in dark times. Uniting nations. If you wonder whether we will be beaten by terrorism, look at the 10,000 extra people who bought football tickets tonight. That's your answer."

Paul Thompson: "Proud to be English tonight and supporting the French in what must be an awful time. Sport really does bring people together."