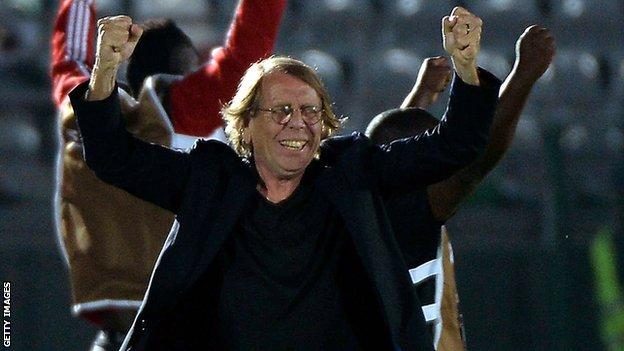 Claude LeRoy resigned as coach of Congo Brazzaville just hours after securing a place for the country in the final of qualifying for the World Cup.

The 67-year-old Frenchman told officials directly after the Red Devils beat Ethiopia 2-1 in Brazzaville on Tuesday for a 6-4 overall victory.

"After two formidable years, I've decided to embark on another adventure," he told local reporters.

There is now speculation he could take over as Cameroon boss again.

Volker Finke was sacked as coach of the Indomitable Lions before the recent World Cup qualifiers, when they beat Niger 3-0 on aggregate.

Who do you want to be crowned this year's BBC African Footballer of the Year? Vote here.

Alexandre Belinga is currently the interim coach of Cameroon while the football association recruit a replacement.

LeRoy has coached at a record eight African Nations Cup finals, including winning the tournament with Cameroon in 1988.

He only once failed to reach the quarter-finals of the Nations Cup and took Congo to the last eight place at the tournament in Equatorial Guinea in January.