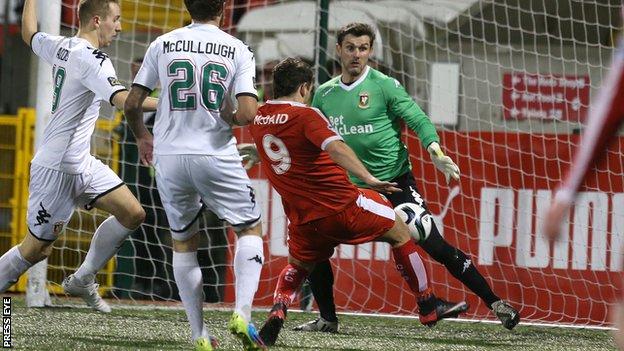 Cliftonville stayed on course for a fourth straight League Cup triumph by beating the Glens in the quarter-final at a blustery Solitude.

Glentoran started with the wind advantage and Johnny Addis fired the dominant visitors ahead.

David McDaid nipped in to equalise on 58 minutes and the Reds moved into a 3-1 lead thanks to a superb Ryan Catney strike and Steven McCullough own goal.

Glens striker Curtis Allen made it 3-2 before his dismissal for two yellows.

A blatant handball saw Allen sent off to leave his side playing with 10 men for final the 18 minutes and he became the third Glens player red-carded in two matches.

It leaves new Glens boss Alan Kernaghan with two defeats in his two games in charge but he will be encouraged by his side's display in the opening 57 minutes.

Addis smashed in from an early corner and Glentoran continued to threaten before going in with a deserved lead at the break.

They maintained their momentum until hesitancy between keeper Elliott Morris and his defence allowed McDaid to net from a Levi Ives cross at the back post.

It was the game's turning point - Catney unleashed a wind-assisted shot from 30 yards which flew into the top corner before McCullough deflected Jude Winchester's free-kick into his own net.

Three goals in seven minutes proved decisive although Allen gave the Glens hope when he volleyed in at the near-post from Jonathan Smith's cross.

But his exit three minutes later left Cliftonville to see out the remainder of the quarter-final with ease.

Cliftonville boss Gerard Lyttle said: "The conditions were horrendous and we couldn't get out of our own half in the first 45 minutes.

"We forced Glentoran into mistakes in the second half and got the goals.

"We are a great team, with a great bond and the second half showed our great desire to win games."

Glentoran manager Alan Kernaghan said: "We played well in large parts of the game but our decision making let us down."

"I'm pleased with the progress we are making although I think we need anger management instead of training sessions."