A lot of people thought Raheem Sterling made the wrong career move when he joined Manchester City for £49m from Liverpool in the summer, but I'm pleased to see he has slotted straight in.

There were question marks over the game time he would get at City, but only two other players aged under 21 have played more Premier League minutes than him this season.

Sterling is not just playing, he is playing well too. He has not made the same impact at City as another of their recent big-money signings, Kevin de Bruyne, in terms of goals and assists but he has made a very steady start.

I think the only thing Raheem will be disappointed about is that he has been substituted in nine of the 10 league games he has started for City so far.

But that should just make him realise he is still a young player who has got to work a little bit harder on his weaknesses as well as his strengths.

He is only 20 and there is a lot more to come from him. He has the potential to be one of the greats but he will not fulfil his promise without a lot of hard work. 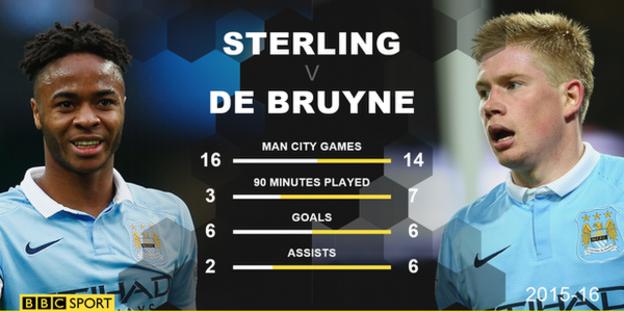 It is obvious Sterling has to add more goals to his game, but I think he needs to improve his end product generally.

Yes, he put in the cross to the back post for Wayne Rooney's volleyed goal in England's friendly with France this week.

But I was at Wembley working as a pundit and sitting next to Paul Scholes, who made me laugh when he said Raheem was actually aiming for Harry Kane, who was running in at the near post.

I don't know if that comment was just down to Scholesy's Manchester United allegiance, but it is true that Sterling's crossing has been extremely poor for City this season - he has a success rate of less than 6% from open play.

Whether it is his finishing or his crossing we are talking about, it clearly needs to be much better to make the most of his ability to get behind opposition defences.

My old Arsenal team-mate Marc Overmars is exactly the kind of player I think he should aspire to be.

Overmars was a winger but when he got into the box I always backed him to score. His goals-to-game ratio for the Gunners was incredible.

Part of that was down to the quality of his finishing - he almost always seemed to hit the target, and was capable of placing his shots - but he would get himself in the right positions to be able to score too.

Sterling has been used centrally as well as on the left by City but, if he is out wide, I want to see him get to the back post when crosses come in from the opposite flank to pick up anything that comes through to him, which is the sort of thing Overmars always looked to do.

Sterling's finishing has been questioned, and maybe he also makes the wrong decision sometimes when he is through in one-on-one situations - I have seen him shoot straight at the goalkeeper quite a lot.

But even if you are not a natural finisher you can get both of those things right with experience and practice, so it is good to hear he has been working on them in training.

Even the best strikers work on their technique and he should be using those sessions as an opportunity to miss and work out what he should do differently next time.

I would look back at chances I missed and think maybe I should have had a cleaner strike there or, if the goalkeeper committed himself early, I should have slotted it past him rather than striking the ball hard.

But sometimes there is no definite right answer as to what you do when you are in front of goal - as long as you put the ball in the net.

It comes down to the individual and what he believes he has to do. The more times you are in those situations, the more you get used to it and have the composure to get it right.

I think Sterling is getting there, slowly. Since his move to City, he is getting more clear-cut chances in front of goal, is having more shots and his shooting accuracy is better than last season too.

No wonder he is already scoring more goals - he got seven in the league last season but already has four for City - but he needs to keep on working on that aspect of his game.

From watching Sterling I can see he is full of confidence at the moment - he believes he is good enough to be in the City team with players of the calibre of Yaya Toure and David Silva, and he is right.

It is great to see, because I know only too well what it is like when a young player has his self-belief absolutely blasted out of him after a big-money transfer.

When my son Shaun Wright-Phillips joined Chelsea for £21m in 2005, it looked like the dream move for him.

He was 23 and had been absolutely flying for City, who wanted to sell him to the highest bidder because they were £62m in debt. Their fans didn't know it at the time, but it wasn't up to him whether he stayed or not.

I was delighted when Arsenal came in but they pulled out when the bidding got to £12m. Then Chelsea blew everyone else out of the water.

They were the champions and, at the time, Jose Mourinho played with wingers so it seemed like the perfect fit.

Arjen Robben and Damien Duff were there so I knew Shaun was going to Chelsea to contend with world-class players but, just like with Raheem at City, I expected them to help him improve too.

Sadly it did not work out like that. I went to watch him a few times when he first joined and, no matter how well he played, he would always get taken off. Eventually he lost his starting place altogether.

It was heart-breaking to watch but he has got a very placid demeanour so he just got on with it - he never told me it bothered him.

But my observation of the whole situation was that it must have affected his confidence because he stopped playing like he had at City, and it had an adverse effect on him for the rest of his career.

When he was at City he was like a little rubber man, who would get kicked, get up and take a few men on. He scored a lot of goals that way and City fans loved him because he had come through the youth team and epitomised what they wanted to see.

At Chelsea he turned into a player that played safe. He did not take risks and he stopped taking people on.

It is easy to say now that it was the wrong move but I look back at it now and still think he was right to go - there was no way he could have turned that opportunity down, and it is just a shame the way things turned out.

He could not have tried any harder - nobody who has worked with Shaun would question his work ethic - and it is just a shame the way things turned out.

Other players have had the same experience too - a move that looks like being a fairytale does not pan out that way.

That is how you go into those deals. You won't move to the next level otherwise and, when you sign, you are thinking you are going to be the player where they can say 'it did work out for him'.

Sterling can handle being in the spotlight

Whatever Sterling achieves in his career, two things are certain: he will always be known for his £49m price tag, and he will always get stick from Liverpool fans when he plays his former team.

Sterling faces the Reds on Saturday for the first time since his controversial departure from Anfield, and I am sure he knows what sort of reception he will get from their travelling fans.

I expect he will take it in his stride - from meeting him a couple of times I know he is quite a cool and calm character, and he can cope with being in the spotlight.

His transfer should definitely have been handled differently but he was right to leave Liverpool if he thought he could better himself - now he owes it to himself to be as good as he can be to prove his decision was right.