Alan Pardew enjoyed victory against his old club as Crystal Palace came from a goal down to trounce Newcastle.

Striker Papiss Cisse opened the scoring for the visitors with a glancing free header from close range on 10 minutes.

Palace move up to sixth after a devastating display in which they could have won by more.

Jason Puncheon and Joel Ward both had efforts saved by Rob Elliot - the goalkeeper could do nothing about the five he did concede though.

McClaren and Magpies staring into the abyss

Newcastle's problems are finding the net on a regular basis, and conceding too many goals at the other end.

Add in reports of disharmony between McClaren and the players and it is the perfect recipe for relegation, with this defeat meaning they drop into the relegation zone.

They have scored 14 goals in as many games this season - and six of those came in their victory over Norwich - while letting in 30, the joint-most in the league alongside Bournemouth.

Big money summer signing Aleksandar Mitrovic was dropped to the bench on Saturday, with Senegalese striker Cisse starting up front, and he repaid his manager's faith by netting his first goal since the opening day.

That was all the joy the travelling fans had and they had to endure defender Fabricio Coloccini falling over while trying to clear the ball in the lead up to Palace's second goal, while fellow centre-back Chancel Mbemba was all too easily beaten by Wickham for the third and gave the ball away for the fifth.

Loud boos rang out from the Newcastle fans at the final whistle and McClaren is now faced - should he get the opportunity to do so - with the desperate task of turning around the form of a side who have won just twice.

Pardew, who was boss of Newcastle between December 2010 and January 2015 before taking over at Palace, has now won 100 games as a manager in the Premier League.

Since he arrived in London at the start of the year Palace have seen an upturn in their fortunes, earning 53 points compared to Newcastle's measly return of 23 in the same period. 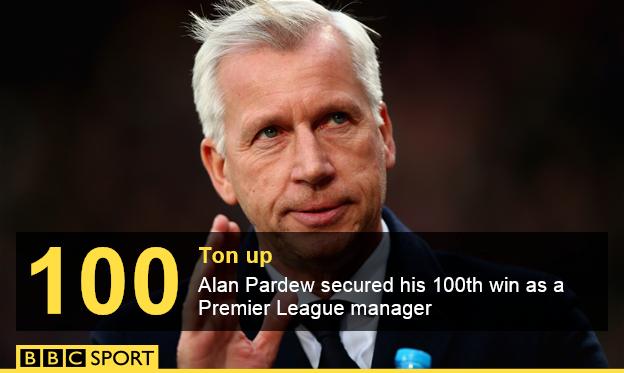 This showing against his old side was full of pace and attacking intent, as the hugely impressive Bolasie and Zaha were allowed to display their quick footwork and trickery to torment the Magpies defence.

Their fifth goal was a stunning effort as winger Bolasie led a speedy counter-attack and McArthur was on hand to finish from close range.

Plaudits should also go to lone frontman Connor Wickham who held the ball up and brought his team-mates into play with his strong, unselfish work. The Palace striker notched up two assists in the match.

Man of the match - Yannick Bolasie

Newcastle boss Steve McClaren: "When we get disappointments, can we recover? We are not doing. We have to find a solution to that.

"It is not about systems, it is about attitude, about fight, about running backwards as quickly as you run forwards but when the third goal went in that went down."

Crystal Palace boss Alan Pardew: "I am really pleased with the performance, we were terrific. We were really good today. This is the sort of energy we have.

"I have got people I love at that club, fans, staff and players but whatever I say about Newcastle is contrived so I don't want to say anything other than I hope their fortunes changes."