They are the two European giants sizing each other up ahead of what could be a must-win match for both.

And in truth, Celtic and Ajax could be forgiven for thinking they were looking in a mirror when doing so given the nature of their respective seasons.

Where they have prospered domestically - both top their tables with just one defeat - they have floundered in Europe as they await a first Europa League win of the season.

It is an issue both managers need to address urgently if they are not to be afflicted with an early exit.

During the dark times after back-to-back defeats to Molde, Celtic manager Ronny Deila will have searched for chinks of light.

And shining brighter than anything will be that they will meet a Dutch side they should have beaten first time round.

Lasse Schone returned to haunt Celtic with a late leveller, almost two years after scoring a winner against them in a Champions League tie. 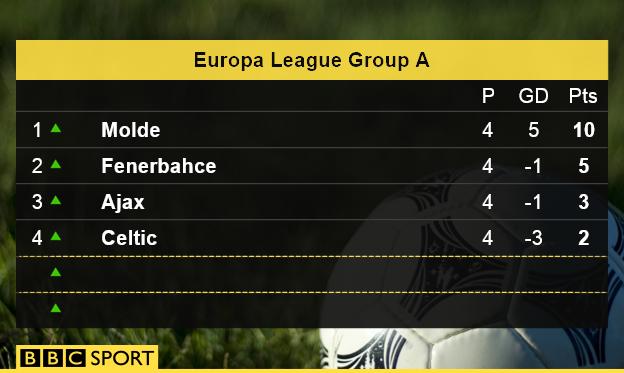 Emilio Izaguirre's sending off that night didn't help, but two points were carelessly whipped away from under the nose of Deila.

Ajax's continental form hasn't exactly been inspiring in recent times either, they have failed to win away from home in Europe since a 3-0 hammering of Legia Warsaw in last season's last 32.

Both of these former European Cup winners want to be scrapping for a more substantial prize than second place in a Europa League group and, like Deila, Frank de Boer craves progress.

However, unlike Deila, De Boer is not under as much duress to qualify according to his former Netherlands international team-mate Andy van der Meyde.

"They want to win the game but I don't think he's under pressure," van der Meyde told BBC Scotland.

"He's done a good job at Ajax, he's won a lot of championships and has a lot of respect from the supporters. They have trust in him.

"We all know that it's difficult now to play in Europe, but the club are back at the top of the Dutch league now and if they keep this young team together they will get back to the Champions League."

Former Everton winger Van der Meyde - who played in Ajax's Champions League qualifying defeat to Celtic in 2001 - admits he is surprised by the fact the two clubs occupy the basement spots in Group A.

"I didn't expect that," he added. "I thought when I first saw the group that they both had to go through."

Celtic's cause is not helped by the revelation that captain Scott Brown is out for months, something that added to Deila's original midfield headache with Nir Bitton and Stefan Johansen suspended.

However, Ajax arrived in Scotland with injury problems of their own.

The talented Anwar El Ghazi will be missing along with his Dutch Under-21 colleague Daley Sinkgraven - both of whom started in September's 2-2 draw with the Scottish champions.

And both know that a win for the Turks would mean elimination for any losers at Celtic Park or indeed both with a draw.

With that in mind, Van der Meyde believes the inexperienced visitors will come to attack and ensure they take it into the last week.

He was also generous in his comparison with his side that featured the likes of Zlatan Ibrahimovic, Rafael van der Vaart and Wesley Sneijder.

"This is a young team but you can see they are hungry. As a player of Ajax you have to win but you also have to play good football.

"They miss a little bit of experience although they have some with [Johnny] Heitinga and [Joel] Veltman, who is still young.

"I think this is a team like we had when I was playing for Ajax, a young team with a lot of talent.

"It will be difficult because I also played one time against Celtic and it's a lovely stadium with lovely supporters and it's difficult to play there."