Paris St-Germain have four players in the Champions League team of the week after thrashing Malmo 5-0 - although Swedish favourite Zlatan Ibrahimovic does not feature.

The French champions have three defenders in the team after keeping a fourth clean sheet in five Champions League matches.

There are two Premier League players in the XI, with Arsenal midfielder Mesut Ozil and Chelsea defender Gary Cahill playing key roles in crucial wins for their respective sides. 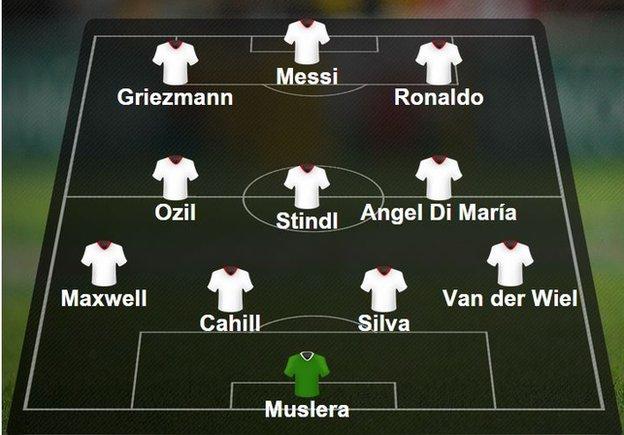 The Galatasaray goalkeeper was unable to prevent the Turkish side from losing 2-0 at Atletico Madrid, a defeat that ends their hopes of qualifying for the knockout stages. The Spaniards had 24 shots, compared to Galatasaray's three.

Paris St-Germain secured their qualification for the knockout stage with a game to go by drubbing Malmo 5-0. Brazilian defender Maxwell made two tackles, two interceptions and one clearance.

Another strong defensive performance from Paris St-Germain, who have conceded only one goal in their five Champions League matches this season. The Dutch defender was another who played a key role in their win in Sweden.

Maccabi Tel Aviv were restricted to just two shots on target by Chelsea, with defender Gary Cahill playing a key role for the Premier League champions. Chelsea's 4-0 win in Israel means they need a point against Porto to guarantee qualification in their final match.

Brazil defender Thiago Silva has been an ever-present in Paris St-Germain's Champions League campaign this season. The French side will finish second in Group A, behind Real Madrid.

Another Paris St-Germain player to make it into the team of the week. The Argentina midfielder scored twice against Malmo to take his goal tally to seven in 15 matches for PSG this season.

German side Borussia Monchengladbach can't qualify for the knockout stage but they moved into third in Group D with a 4-2 win over Sevilla. Midfielder Lars Stindl scored twice and created a third.

Arsenal's Germany midfielder scored the opener in the Gunners' 3-0 win over Dinamo Zagreb. Arsene Wenger's men know a victory by two goals - or by one goal if they score three or more - in their final group game at Olympiakos would send them into the last 16.

The Atletico Madrid forward scored both goals in his side's 2-0 win over Galatasaray. The Spaniards have qualified for the last 16 and are level on points with Benfica.

The Portugal forward's two goals in Real Madrid's 4-3 win at Shakhtar Donetsk mean he has 68 goals in 68 Champions League matches. Real have won Group A with a game to go.