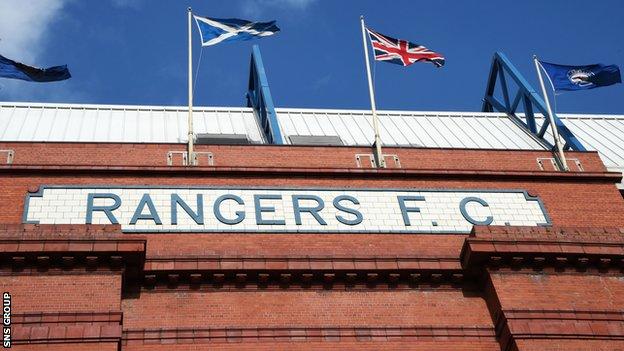 The Rangers annual general meeting has been the focus of conflict in recent years. In addressing the shareholders, the board has tended to be assailed by criticism and unrest.

Regime change eventually took place at an extraordinary meeting last March, and tomorrow is the first AGM for the new board of directors to oversee.

There are still issues to be addressed, not least the ongoing tensions with the retailer and commercial partner, Sports Direct, but short of Mike Ashley turning up and challenging the board in person, the tone of the meeting is likely to be substantially different from recent shareholder gatherings.

At one stage last year, the venue of the AGM was to be a London hotel, only for an eventual return to Ibrox. That element of drama has subsided since Dave King, Douglas Park, George Letham and George Taylor bought enough shares to begin the process of ousting the old board.

King will address the AGM, at the Clyde Auditorium, as the Rangers chairman, but it is a measure of the problems that still exist around the club that he will have to choose his words carefully.

Next month, he will appear at the High Court in London after Sports Direct accused him of breaching an injunction preventing Ibrox directors from discussing the joint retail agreement between the two companies.

The question of Mike Ashley

The majority shareholder in Sports Direct and Newcastle United is not expected to attend the Rangers International Football Club AGM, although his shareholding of a little less than 10% continues to exercise his legal team.

Neither party will disclose the current nature of their relationship, but it is clear enough given the amount of potential litigation - Ashley is seeking a judicial review of the Scottish Football Association's decision to accept King as a fit and proper person and so allow him to take up the chairmanship - to discern the state of affairs.

The joint venture is tied up in Rangers Retail, an arrangement that Sports Direct appear to benefit from to a greater commercial extent than Rangers. Sports Direct also provided a £5m loan just before regime change that gathered up a series of securities, including Rangers' trademarks.

Shareholders may have several questions to ask the Rangers board about Sports Direct and the ongoing commercial relationship, but no answers will be possible due to the injunction the company was granted.

The Rangers board wanted to put a resolution to the AGM to remove the voting rights of any shareholders who have stakes or an influence in other clubs, in line with the SFA's rules on dual ownership. That was successfully challenged by Sports Direct's lawyers, but the topic will remain a pressing, if unanswered, aspect of the AGM.

Rangers' accounts revealed a loss of £7.5m and a business still trying to rebalance itself after a period of turmoil. The losses will continue while the team strives to return to the top-flight and while commercial revenues are tired up in the way that Rangers Retail operates.

Even so, the board has received undertakings from shareholders - most likely King, Park, Letham and Taylor - to provide the external funding of £2.5m to allow the business to continue as a going concern for the next 12 months.

That investment provides a measure of stability for the company, but King has also previously insisted that funds will be available to strengthen the side in the January and summer transfer windows. The manager, Mark Warburton, has also suggested that up to two players might be signed in January.

The resurgent form of Hibs, now level on points with the Championship leaders, adds an air of urgency. King has said in the past that significant funds would be required to restore Rangers to a place of prominence in the top-flight.

There will, then, likely be questions from shareholders about the level of funding that is available.

The board are unlikely to quantify an amount, but they will continue to assure fans and shareholders that they will provide investment for the club, having already provided interest fee loans at the end of last season. The loans will eventually be converted to equity.

The existing directors are, as normal, up for re-election, while Douglas Park has rejoined the board since the AGM notice was issued to shareholders. That is likely to be a formality, but other resolutions are less clear cut.

Resolution nine, which requires 50% shareholder backing, would provide the board with the authority to convert loans from existing shareholders into equity, so increasing their stakes in the company.

Resolution 10, which is a special resolution and so requires 75% shareholding backing, would grant the board the authority to offer shares for cash and the disapplication of the pre-emption rights, which allow existing shareholders to maintain the size of their stake.

Ashley's take alone is not enough to scupper the latter resolution, but other shareholders may also want to protect their pre-emption rights, so the vote could be tight.

Compared to the turmoil of previous Rangers AGMs, these can seem more prosaic times, but the board continues to have significant work to carry out to return the club to sound footing.