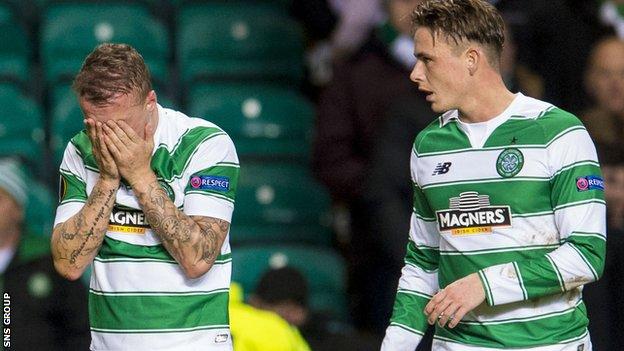 Striker Leigh Griffiths took responsibility for Celtic's defeat by Ajax and failure to progress beyond the Europa League group stage.

Griffiths has scored 18 goals this season, including four in Europe competition, but he missed a series of chances in the 2-1 loss in Glasgow.

"My performance was shocking really. If my finishing was a lot better we'd have kept our place in Europe," he said.

"But we got beaten and in my opinion it's all down to me."

He added: "On another night, I'd have scored two or three. My shooting boots weren't on the right feet tonight."

Griffiths appeared ponderous as his familiar instinctive finishing deserted him.

Asked if he grew anxious as the chances came and went, he said: "Not after the first chance, but when you start missing two, three and four it starts to get to you a little bit.

"I'm one of those confidence players - if I get once chance and don't put it away, I'm confident I'll put the next one away.

"Tonight was one of those nights I couldn't hit a barn door."

He said: "The first one, Scott Allan's played a great ball through and I've just tried to bend it round the keeper, and he's made himself big and made a good save.

"The other one, Stuart Armstrong's played a great ball in and I was contemplating taking it first time or taking it back inside. I've taken a bad touch and tried to take it round him."

Griffiths has dug Celtic out of a few holes this season and one bad evening in front of goal cannot erase those memories.

The striker was asked whether he had felt the need to voice these same sentiments in the changing room.

"I couldn't speak," he replied. "I'm disappointed in myself and I feel sorry for the rest of the boys.

"Tonight's performance - apart from my shooting - you can't fault. We played a really good game and we were the better team on the night.

"Ajax had a lot of possession but they didn't really create anything."