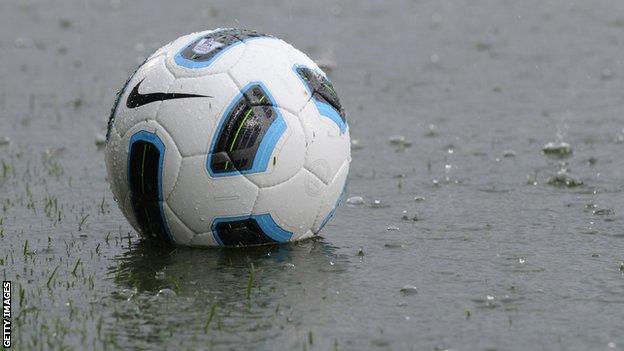 The Irish Premiership match between Carrick Rangers and Cliftonville has been postponed because of a waterlogged pitch.

Saturday's other four top flight fixtures are going ahead as planned.

Cliftonville's inactivity means Coleraine will stay in second place after their Friday night win away to Ballinamallard United.

At Portadown, David Healy's Linfield will aim to halt their alarming slide from the top of the table.

Following three successive league defeats, the Blues are down to fourth in the table and nine points behind leaders and champions Crusaders.

"We are not good enough at the minute and that is something I have to address," said former NI striker Healy.

Linfield have not lost four league games in a row since March 1997.

The Blues had been top of the table when Warren Feeney resigned as manager in early October to move to Newport County.

The Belfast club handed 36-year-old Healy his first managerial job, hoping he could guide them to the Premiership title which they have not won since 2012.

Initially, Healy enjoyed some good results, but the recent defeats by Crusaders, Cliftonville and Glenavon have dented any championship aspirations.

"Portadown is a big game. They have been on a rocky spell recently, but people will be saying the same about us now," added Healy.

The Ports recently lost four league fixtures on the bounce but beat Carrick Rangers and drew at Ballymena in their last two outings.

Another former international anxious to get a win is Glentoran boss Alan Kernaghan.

The ex-Republic of Ireland defender, who took over from the sacked Eddie Patterson earlier this month, has so far seen his new team lose at Crusaders and draw at home to Dungannon Swifts in the Premiership.

On Saturday the east Belfast Glens host Glenavon who have won their last three league matches, and Kernaghan will be glad to have top striker Curtis Allen back from suspension

"It was frustrating against Dungannon because there were a lot of good things. We just couldn't get the ball over the line," said the Glentoran manager.

Leaders Crusaders, unbeaten in the league since the opening day of the season, will aim to extend their superb run by beating Ballymena United at Seaview.

Bottom-placed Warrenpoint will aim to end an 11-match losing sequence in the league when they travel to play one-from-bottom Dungannon Swifts.