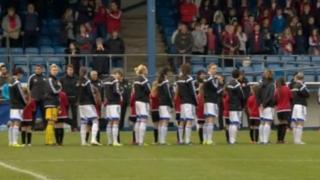 The Football Association of Wales (FAW) faces disciplinary action after failing to play Kazakhstan's anthem before the Uefa Women's Euro 2017 qualifier in Haverfordwest.

Only the Welsh anthem was played before Wales went on to win the game 4-0.