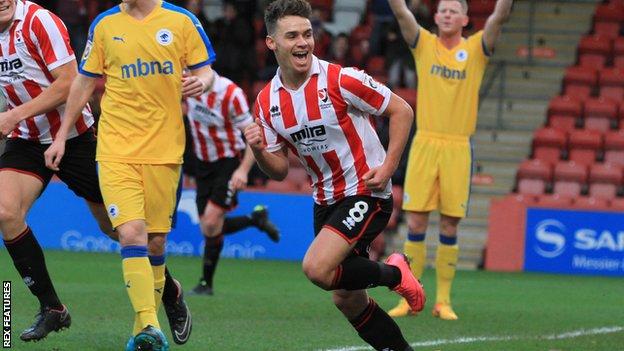 Cheltenham extended their lead at the top of the National League to four points with victory over Chester.

The Robins took the lead when Billy Waters tapped in Ryan Jennings' cut-back after Harry Pell's free-kick had hit the post.

Ross Hannah's header levelled things, but Waters' second from close-range from a Danny Wright cross put the hosts back on top.

Wright tapped in Jennings' cross late on to secure the points.

"I'm really pleased for them and I'm proud of them because we're number one at Christmas and that's always a nice thing to be.

"I thought we had a good first half against the really strong wind, but we made a couple of little mistakes that led to the chance and then obviously their goal.

"I thought that was Danny Wright's best game for a long time, he's had a little bit of a problem with his quad but he showed how fit he was today and how much he wanted to be in the team, and I thought he was magnificent.

"We needed the points to get ahead of the chasing pack and I'm proud of them."