Zlatan Ibrahimovic should move to the Premier League next summer despite saying he has missed his chance, says West Brom defender Jonas Olsson.

The Paris St-Germain striker, 34, recently suggested he had left it "too late" to join a top English club.

But Sweden team-mate Olsson thinks that Ibrahimovic, whose PSG contract expires next June, would be a success.

"He's still at the top of his game. He is the strongest player I have faced. I really hope he comes," said Olsson.

Ibrahimovic, who has won domestic league titles in the Netherlands, Italy, Spain and France, played under Chelsea manager Jose Mourinho at Inter Milan and Southampton boss Ronald Koeman at Ajax.

Sweden's all-time record scorer with 62 international goals has previously said that he turned down a move to Arsenal from Swedish club Malmo as a 19-year-old in 2000 because manager Arsene Wenger asked him to have a trial. 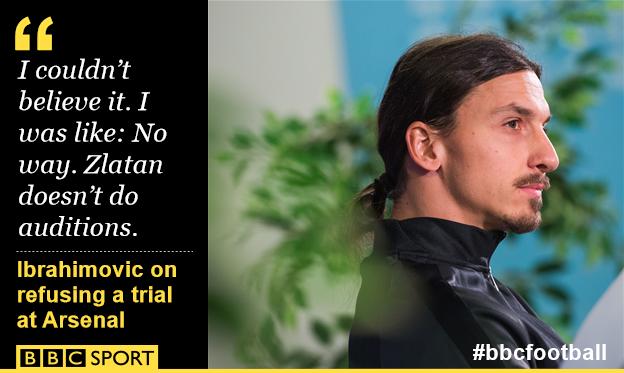 Olsson added: "Zlatan on his day is the most talented footballer in the game.

"He has played under Mourinho before and the only place where he's not 100% appreciated is in the UK.

"I think he can play for any team in this league - he is still that good."

Ibrahimovic was the inspiration as Sweden qualified for Euro 2016 earlier this month, scoring three of his country's goals as they beat neighbours Denmark 4-3 on aggregate in a two-legged play-off.

Olsson is looking to secure a place in the squad for the finals, having recently returned to club action with West Brom after seven weeks out with a groin injury.

"I have been in and out of the Sweden squad but it's important to get minutes here," the defender added.

Statistics correct after PSG's game on Saturday, 28 October, and include appearances & goals from league, domestic cup and Uefa club competitions.