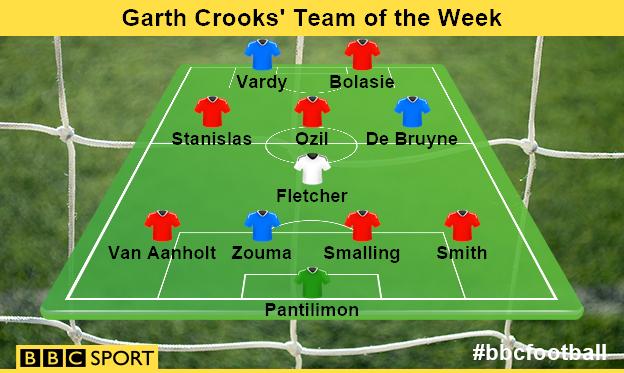 It was another entertaining weekend of Premier League action, with plenty of goals, some surprising results and even a record-breaker.

Sunderland got a much-needed win, and Bournemouth and Everton's draw was a real game-of-the-season contender.

But who stood out? Here's who I've gone for in my team of the week...

Costel Pantilimon's save from Jonathan Walters at 0-0 was a real game-changer and, boy, did Sunderland need the points. Their win against Crystal Palace last week only had real impact if they could beat Stoke at the Stadium of Light.

I've seen Pantilimon have some wonderful games then do something daft. To see the Romanian keep a clean sheet for the second week in a row must have had manager Sam Allardyce walking on air.

What a strike it was by Adam Smith. It was an inspired substitution by manager Eddie Howe but not even the Bournemouth manager could have predicted the impact the full-back would have on this game. Smith's goal, only his second for Bournemouth, couldn't have come at a better time.

Not only that, it was Smith who won the ball in the middle of the park and started the move that resulted in Junior Stanislas's equaliser.

What a yawn. The only decent thing to come out of Manchester United's performance this weekend was Chris Smalling. Manager Louis Van Gaal must be working extremely hard in training to get a team full of such wonderful attacking flair to look so dull. Thank goodness for Smalling who, almost single-handedly, kept Jamie Vardy from adding to his record-breaking tally.

Surely the time has come for the United fans to petition the club and demand that Sir Alex Ferguson comes out of retirement and rescues us all from this complete and utter drudgery. It's just not football.

This was a very tricky game for Chelsea but they coped admirably. One of the reasons for this is the speed at which Kurt Zouma is developing as a young defender. He was majestic in the air against Spurs, lightning-quick on the ground and a real threat in the opposition's penalty area on set plays.

In a season where Chelsea have been leaking goals he certainly plugged that gap against Tottenham.

It was going to take something a bit special to beat Stoke's Jack Butland and it was left to Patrick van Aanholt to do it with a cracker. The Dutch full-back has had a difficult time settling in at Sunderland but, under new manager Sam Allardyce, he appears to have found his form.

Now that Sunderland have finally employed a manager who knows what it takes to stay in the Premier League perhaps they might stick with him beyond Christmas. It would make a nice change.

There's a calmness about Darren Fletcher's game these days but, then again, here is a player who, after a terrible illness, is lucky to be playing football at all.

Against West Ham the former Manchester United player and Scotland captain was the Baggies' steadying influence, particularly for his midfield partner Claudio Yacob, who is often unpredictable but now looks as steady as a rock too. Football teams can't go wrong with players like Darren Fletcher playing in them.

Watching Kevin De Bruyne drive into the box from midfield searching for goals is a delight. However its De Bruyne's general contribution that is proving so exciting for City. Since the start of last season the Belgian currently has the most assists in Europe's top five leagues. That tells you everything you need to know about him. A player with a great attitude.

What a game. I thought Ross Barkley had won it for the Toffees, and so did their fans, but all credit to Bournemouth and their stewards for getting over-exuberant Everton fans off the pitch and the game restarted. At one point I was convinced that the BBC Final Score reporter was going to explode such was his excitement about Stanislas's equaliser.

After the way Stanislas and his team-mates performed against Everton, the Cherries just might start believing that survival in the Premier League is a very real possibility.

His goal might have come from a John Ruddy mistake in the Norwich goal, but it was then beautifully taken advantage of by Arsenal and brilliantly executed by Mesut Ozil.

Arsenal should have won this game and would have done had Laurent Koscielny and especially Alexis Sanchez not suffered injuries. It was the departure of Sanchez and that extra bit of class that caused Arsenal the most disruption. The Gunners need to sort out why so many of their players are breaking down. It's in danger of ruining their season.

This game could have been 10-1. Crystal Palace absolutely annihilated Newcastle United at Selhurst Park, and how refreshing to see Yannick Bolasie amongst the goals to complement his exciting play. I can never understand why a natural winger with so much ability doesn't score more goals. Bolasie is a real talent and he is having an excellent season for the Eagles.

What a contrast with Newcastle United, who looked like a team in turmoil. Media reports of bust-ups in training between the captain Fabricio Coloccini and manager Steve McClaren have clearly had an impact on the dressing room, and looking at this performance they need to sort out their differences very quickly.

Well, he's only gone and beaten Ruud van Nistelrooy's record. Whatever you think of Jamie Vardy as a player, to score in 11 consecutive matches is an extraordinary achievement. To perform such an heroic feat against a Manchester United side brimming with international stars - and the team Van Nistelrooy played for when he set the record - must have been particularly satisfying.

Leicester seemed to be perfectly comfortable allowing United to pass the ball between themselves for five minutes, win it back, and hit them on the counter-attack. It might not be as sophisticated as Louis van Gaal's scientific approach but it's far more effective and considerably more attractive.