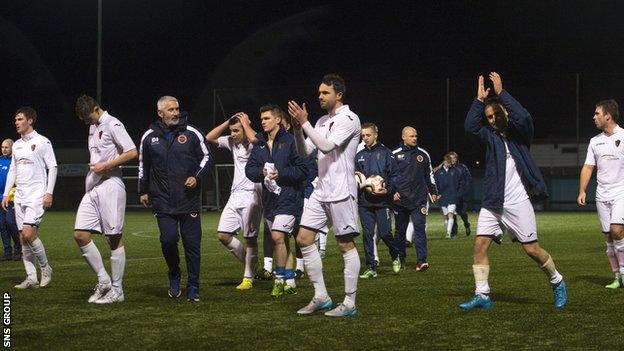 The theory that everyone can be connected by six steps came to mind during Saturday's fascinating Scottish Cup third round tie between Stenhousemuir and East Kilbride.

Amidst swirling wind and rain verging on horizontal, one man weighing up risk and reward before each decision to venture from an Ochilview dug-out was Gardner Speirs.

The 52-year-old is currently assistant manager at Lowland League East Kilbride, where he supports boss Billy Ogilvie, but seems a fitting person to start this cycle with, given his lengthy and worthwhile contribution to the game at many levels.

In the 36th-minute of the match watched by 502 people, Speirs' eyes must have lit up as he witnessed left-back Bernard Coll's pearler from 25 yards hit the top corner to give Kilby the lead.

A pile-up ensued, and at the bottom was Coll, brought to East Kilbride because of a previous link to Speirs.

Earlier in his career, this 21-year-old from the Gorbals had been earmarked as a replacement for the now Scotland international Andy Robertson at Queen's Park, after the marauding full-back had benefited under the tutelage of ex-Spiders manager Speirs and won a move to Dundee United, who, as an aside, were well represented at Ochilview through former players Jason Scotland and Jim Paterson.

Spraying passes out to Coll on the left channel on this soaking afternoon was East Kilbride's Martin McBride, another with connections to Queen's Park and Speirs, but also with a Scottish Cup memory that is perhaps brought up more than the central midfielder would like.

For in Gretna's famous run in 2006 - where they lost to Hearts on penalties - McBride had been named in the match-day squad in every round apart from the Hampden final.

Watching McBride elegantly get the better of Stenny's midfield for most of the 2-2 draw was Davie Irons, who was Gretna assistant manager at that Scottish Cup final and now performs the same role to boss 'Bomber' Brown Ferguson at the Warriors.

Ten years previously, Irons was pivotal in helping Gretna rise through the leagues, and he will acknowledge the brief but significant contribution Andy Smith made to that incredible story during the 2004-05 season.

Yes, the lanky, blonde-haired striker who absolutely banged the goals in for Airdrie and Dunfermline in the 1990s, and who was famously the subject of an ultimately unsuccessful media campaign to get him a full Scotland call-up.

Well, giving Irons a bout of deja-vu a decade later in Stenousemuir was another forward with a shock of blonde hair going by the name of Smith; Jack Smith, son of the aforementioned Andy.

Tenacious, fast and sure to go onto greater things in the game, Smith pestered Stenny's defence from the start and was unlucky not to score on several occasions.

Some of the 20-year-old's efforts were off target and some were saved by a certain Matt Gould, a goalkeeper that battled on despite clearances the wind often brought back in his direction, and who can also refer up to a famous father.

His dad is Jonathan Gould, the ex-Celtic goalkeeper who won two league titles and three League Cups with the Parkhead side.

Gould was a six-year-old watching his old man lift the trophy after one of those final victories in 2000; a 2-0 win against Aberdeen.

And the Dons' assistant manager on that day, 15 years ago? Gardner Speirs.