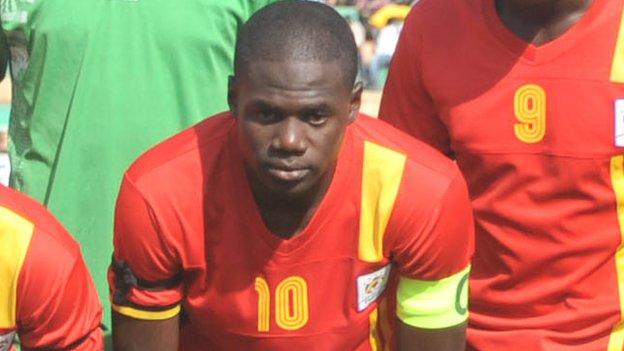 Uganda and hosts Ethiopia will meet in the semi-finals of the 2015 Cecafa Senior Challenge Cup on Thursday.

The Cranes saw off guest side Malawi Flames 2-0 at the Addis Ababa Stadium.

Captain Farouk Miya (pictured) got his third goal of the tournament as he headed home a Joseph Ochaya cross after just five minutes.

Ceaser Okhuti scored after just two minutes of the second-half to seal the win for coach Milutin 'Micho' Sredojevic.

"I am happy to be on the score sheet again today," Okhuti who features for Express FC back in Uganda told BBC Sport.

Ethiopia needed penalties to beat Tanzania when the game ended after 90 minutes.

Jon Bocco gave Tanzania the lead after 25 minutes, but the hosts came back strongly to convert a penalty through Gatoch Panom midway through the second half.

Tanzania's Jonas Mkude and Shomari Kapombe failed to convert their penalties as Ethiopian goalkeeper Mamo was the hero saving their shots to hand his side the victory.

On Tuesday Sudan will face South Sudan for the second time in a week while defending champions Kenya take on Rwanda in the other quarter final matches.