Sixteen more officials have been charged by US authorities investigating corruption at Fifa.

The new indictment, released by the Department of Justice in Washington, came hours after the arrest of two Fifa vice-presidents in Zurich on Thursday.

Former Brazil football federation chief Ricardo Teixeira was among those accused of being "involved in criminal schemes involving well over $200m (£132m) in bribes and kickbacks".

Fifa said it would "fully co-operate".

Earlier, Concacaf president Alfredo Hawit and Conmebol president Juan Angel Napout were held in a dawn raid at a Swiss hotel, arrested on suspicion of accepting millions of dollars of bribes, at the request of the US authorities.

Hawit, 64, is interim president for North, Central America and Caribbean football, while Napout, 57, oversees football in the South American confederation.

The Swiss hotel is the same location where several officials from world football's governing body were arrested in May.

Fifa's executive committee has been meeting in the city, voting on reforms.

The current and former senior football executives charged are:

US attorney general Loretta Lynch said: "The betrayal of trust set forth here is outrageous. The scale of corruption alleged herein is unconscionable.

"And the message from this announcement should be clear to every culpable individual who remains in the shadows, hoping to evade our investigation: you will not wait us out; you will not escape our focus."

Chief of investigation Richard Weber of the IRS's criminal investigation division said: "Good intent has been replaced by greed and misguided goals.

"This case has been nothing short of one of the most complex, worldwide financial investigations ever conducted."

What else is on the new indictment?

The new 236-page indictment now alleges a total of 27 defendants engaged in a number of schemes involving selling lucrative media and marketing rights to international soccer tournaments and matches, among other valuable rights and properties.

The convicted defendants have agreed to forfeit more than $190m (£125m). And more than $100m (£66m) has been seized in the US and abroad in connection with the alleged criminal activity. The US has also asked 13 other countries to help them seize assets.

In May, nine Fifa officials and five sports and broadcast marketing executives were indicted by US prosecutors on corruption charges as the governing body became engulfed by claims of widespread wrongdoing.

On Thursday, it was announced that one of those defendants - former Concacaf president Jeffrey Webb, had pleaded guilty to money laundering, wire fraud and racketeering and agreed to forfeit $6.7m (£4.4m).

He did not contest his extradition to the US and is believed to have given the evidence used by US investigators to bring these latest charges.

The 92 counts contain detailed allegations including:

The charges allege that illegal payments have been made around the sale of broadcasting rights for tournaments into the next decade.

The US DoJ statement said: "These defendants, as alleged, sought to institutionalise their corruption to ensure that it lived on, not for the good of the game but for their own personal aggrandisement and gain."

Fifa corruption inquiries: What else is going on?

Fifa suspended the pair in October while Fifa's ethics committee investigates corruption claims against them. Both deny wrongdoing.

Shortly after the seven Fifa arrests in May, Blatter announced he would step down as president in February 2016 after 17 years in charge, despite having been re-elected the previous week.

Fifa's reform committee chairman, Francois Carrard, said at a news conference in Zurich on Thursday that the latest arrests were "a very important step" as part of changes "so Fifa can renew itself".

A Swiss criminal investigation into the bids for the 2018 and 2022 World Cups was also launched earlier this year, alongside the US inquiry.

"This was supposed to be the day when Fifa launched a fightback.

"Fifa's current leadership say a new package of reforms will transform them into a 'modern, trusted and professional sports organisation'.

"But the scale of that task was laid bare by US attorney general Loretta Lynch, who outlined how huge sums had been embezzled by officials - including funds destined for natural disaster relief, youth leagues and football development projects.

"These latest indictments focus on executives in North, South and Central America.

"But further painful days surely await Fifa given Lynch's promise that culpable individuals 'will not escape' the focus of the US legal system."

Could it even mean the end of Fifa?

It is now being suggested that the world governing body's reputation has been so badly tarnished it is beyond repair and that football needs to start again from scratch.

Australian entrepreneur Jaimie Fuller, chief executive of global sportswear firm Skins, told BBC Radio 5 live: "It's time to explode the place and rebuild it in a fit-for-state purpose for the 21st century.

"The Swiss government have the capability. They have the legal rights to seize Fifa's assets.

"They can liquidate Fifa and reconstitute it in a separate form with accountability and transparency. 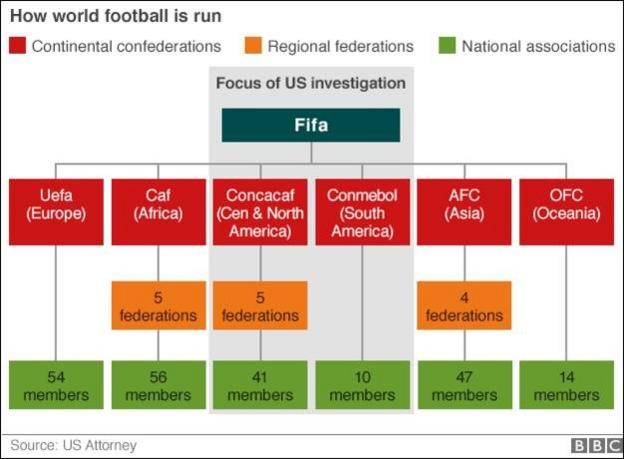