The Portuguese hit three in 11 minutes either side of half-time before adding his 88th Champions League goal.

Karim Benzema scored the last goal and the opening two for a hat-trick, with Mateo Kovacic also netting.

The result equals Liverpool's 8-0 win against Besiktas in 2007 - when Madrid manager Rafael Benitez was in charge.

Ronaldo - the all-time highest Champions League scorer - becomes the first player to score more than 10 goals in the group stages with his 11 in six games. 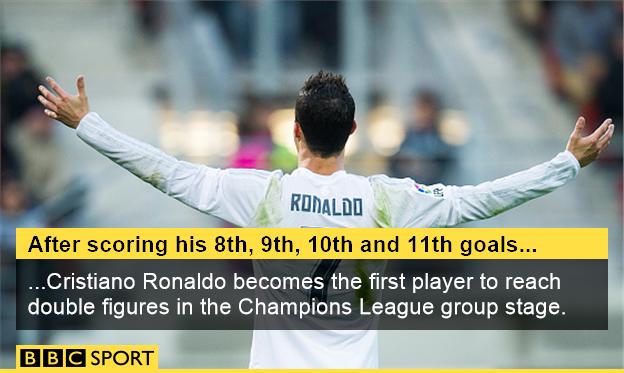 Spanish club Madrid had already qualified for the knockout stages as Group A winners, while Malmo of Sweden finish bottom.

In the group's other match, French champions Paris St-Germain - who were sure of second place - beat Shakhtar Donetsk 2-0 at home, with the Ukrainians dropping into the Europa League with third.

Elsewhere, Atletico Madrid beat Benfica 2-1 away to leapfrog their Portuguese opponents and reach the last 16 as winners of Group C.

Both teams were assured of a place in the knockout stages already, while the group's other match finished in a 1-1 draw between Galatasaray and Astana.

That result means Turkish club will go on to play in the Europa League after finishing third in the group.

Shots on Target
Home16
Away2