James Wilson flicked home his second goal in two starts to put the visitors ahead against the run of play, but Bradley Johnson's far-post header levelled matters by half-time.

Rajiv van La Parra's strike, after a swift counter-attack, looked to have secured victory for the Seagulls.

But Martin made it 2-2 after Gordon Greer fouled Johnny Russell.

Martin's coolly taken spot-kick denied Brighton a win, but they remain unbeaten in 20 league games this season and stay two points clear at the top of the table after Middlesbrough's goalless draw away at Birmingham City.

The fine run looked in doubt early on as Derby, who drop a place to fourth, could have been ahead inside a minute through a Tom Ince strike that was deflected wide.

It set the tone for a bright start by the hosts with Martin having a shot saved, and Jason Shackell seeing a header cleared off the line before Ince volleyed straight at goalkeeper David Stockdale.

Brighton were lively on the break and went in front when on-loan Manchester United striker Wilson slotted the ball in from Jamie Murphy's fine cross following good work by Inigo Calderon. 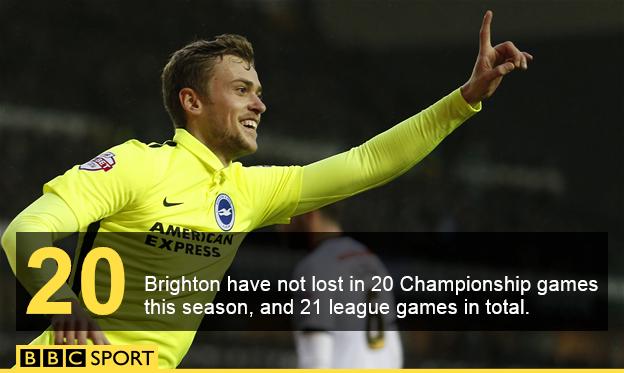 Derby, who themselves have only lost twice in the league, slowly recovered and Johnson's towering header from Jacob Butterfield's deep corner deservedly brought them level.

Both sides struggled to create clear chances after the interval, but Brighton's quality on the break was apparent again when Dutch substitute Van La Parra sent the ball past keeper Lee Grant after Johnson was dispossessed in midfield.

Martin almost levelled after a sloppy backpass before scoring his first goal in seven games when his 88th-minute penalty beat Stockdale.

"We didn't deserve to lose the game, our start was very positive and then they produced a real moment of quality with a well taken goal against the run of play.

"A lot of credit goes to our players for not giving up, to keep going, and it was a cool finish from Chris (Martin) under real pressure. They had a difficult game to today and our players afterwards felt like it was a loss.

"We have a good record at home and that's the standards we are working towards but overall it's a hard fought point and I would have been really disappointed if we had lost that game."

(On the late penalty) "I thought it was very harsh. Unless somebody shows me a different angle, from the one I've seen there's no doubt Gordon dives in because he has to but I don't see contact.

"The win would have meant a lot to us and we are disappointed but I think you have to give our players credit to come here against a team on such a good run with the quality they've got and I don't think anyone would have begrudged us the win."