Monk admits his future is out of his hands, as his side have won just once in their last 11 Premier League games.

"He's under severe pressure now. It's the worst performance I've seen from a Swansea side for a number of seasons."

After hearing Monk's post-match interview, Walsh said: "Garry's sound of his voice - he seems like a beaten man.

"How long he gets? That's up to the board of directors. It's a massive decision. They're going to take their time over it, I'm sure.

"The club now is in trouble. They've just got to hope there are three worse teams that Swansea in the division this season."

Manager Monk's position had already been under intense scrutiny and, having heard his side booed for a second successive home game, there will be more doubts than ever about his future.

Former Wales and Swansea midfielder Leighton James added: "The one word that summed it all up for me was spineless.

"It was a spineless performance today, by a team that looks divided, looks disjointed, looks de-motivated.

"I could go into quite a few statements that would make me unprintable."

However, James is unsure if any available manager could do a better job than Monk.

"I will always defend Garry Monk, until somebody comes to me and gives me a better alternative," he stressed. 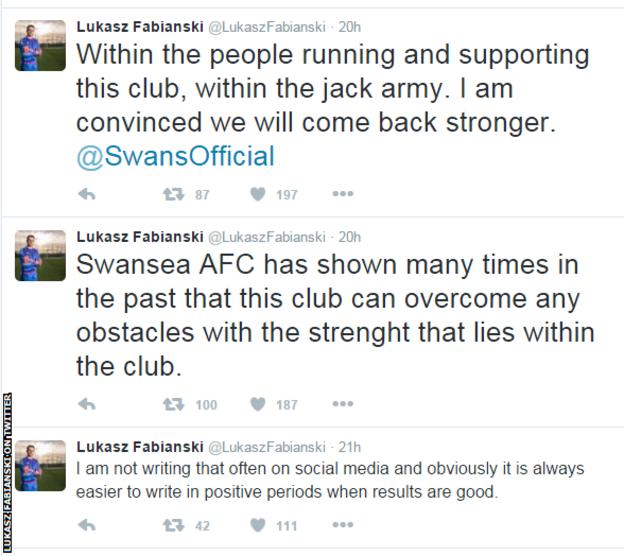 "What makes you think that anybody else is going to come in and do a better job?"

Swansea struggled to create any meaningful opportunities against Leicester and looked particularly vulnerable at the back - an area of strength since Monk took over in February 2014.

"Why wasn't (Jefferson) Montero starting? There was no-one else in the squad who could turn players and go at players.

Walsh continued: "I would question Garry's tactics, in terms of who he played.

"I don't think I could get to the edge of my seat on one occasion. For me, that's not good enough. The fans expect a lot better than that.

"That sort of performance cannot go on at the Liberty."

The Swans travel to Manchester City on 12 December before back-to-back home games against West Ham and West Brom.

"This obviously can't go on," Walsh added. "Do they panic, or do they give Garry a little more time?

"I would give Garry another few games. It is game by game for him at the moment.

"He's on a knife-edge, without a shadow of a doubt. It can split either way for him, depending on other results now in December."