It is the Premier League season that has everyone scratching their heads.

Champions Chelsea are down in 14th. Leicester, bottom at Christmas last year, are top less than 12 months later.

In fact, as this image below shows, the old cliche that anyone can beat anyone has never been more apt. Undoubtedly, there have been some strange results. 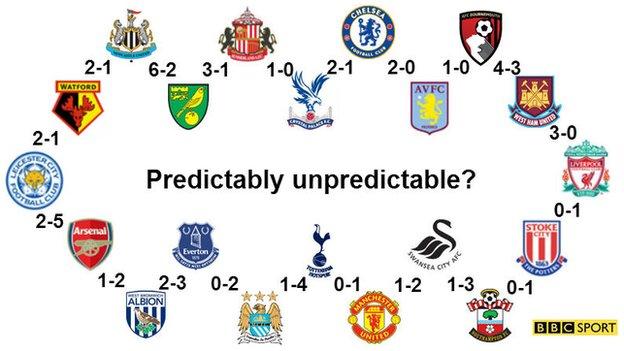 But just how unusual has this season really been and what have been the key factors in making it so unpredictable? BBC Sport crunches the numbers to find out.

Chelsea go from champions to chumps

Chelsea's start to the season is the worst of any reigning Premier League champion.

In fact, Blackburn are the only other side to have picked up fewer than 20 points in the first 15 games of a title defence.

Chelsea and Manchester United have mounted the best starts to a defence, both registering 40 points in 2005-06 and 1993-94 respectively.

This is reasonably unusual. There are just six points between top side Leicester and fifth-placed Tottenham - it's only been that close one other time in the past 10 seasons.

Last season's top two of Chelsea and Manchester City have lost a combined total of 12 games this term - the highest over the past 10 seasons.

Teams are loving an away day this season.

There have been 51 away victories from 150 Premier League games this term - that's 34% of fixtures.

The three promoted teams of Bournemouth, Watford and Norwich are all currently out of the relegation zone, which you might think is unusual.

Lately, it's not been that uncommon.

In fact, it has happened twice in the previous five seasons. Newcastle United, West Brom and Blackpool were above the drop zone at this point in 2010-11, as were QPR, Norwich and Swansea in 2011-12.

However, those are the only three times the feat has occurred in the past decade, and rarely do one of those sides beat the champions, as Bournemouth did when winning 1-0 at Chelsea on Saturday.

Will Leicester win the league?

The team that's top in early December is most likely to go on to claim the title, right?

If history is any indicator, Leicester City have actually got almost a 50-50 chance of causing a massive shock and becoming champions.

But of the eight different clubs to be top at this stage, only three - Manchester United, Manchester City and Chelsea - have gone on to win the title.

Or is it same old, same old?

It's all very intriguing, but then again, a quick comparison of the table this year with how it ended last season suggests little has changed.

Four of the current top six finished in the top six last season...

And the current bottom three...

Well they all just about survived last season...

And even in mid-table...

There's a familiar look to how it finished up last term, with four of the same six teams occupying the middle six positions.

So maybe the world of the Premier League hasn't been completely turned upside down just yet.