You've got to be a sucker for punishment to be a football referee, haven't you?

When a survey* indicates that one in five in England has suffered physical abuse and nearly two-thirds experience verbal abuse on a regular basis, why would you want to put yourself in harm's way?

More importantly, who would want to do such a job?

Here, four referees under 30 - a schoolteacher, an anti-social behaviour officer, a business development consultant and a paralegal - talk candidly about their careers and reveal what drives them.

Tell us your stories, either by commenting at the bottom of the piece, or by joining today's Sportsday debate.

"Reffing gives me my own identity, it gives me control. I like to build a rapport with players, coaches and parents, but the game depends on my decisions and how good my decision-making is. There is a buzz having control of a game in my hand.

"Adult games are the toughest ones. The players release so much tension and frustration. Sometimes it's just passion, sometimes they want to prove a point. It's funny because I used to be that player.

"Respect is a massive thing for me. You can have an opinion, just don't be abusive. I've had abusive language directed at me, but never a racist comment. There are idiots on the sidelines, but you can't ignore them. If I ignore them, I'd have to ignore everyone.

"Refs are always getting slaughtered for any mistakes they make, but they never get enough praise when they get something right. There is a lot of pressure. All eyes are on them. But they are only human.

"There is more chance to further your career as a ref than as a player. The ambition is to become a professional referee. I would love to be the Amir Khan of football referees - a role model for others."

"I started refereeing to get a bit of extra pocket money. It beats getting a paper round. It was like getting dragged on a rollercoaster for the first time. You don't want to get on, but then you do it and you love it.

"It requires 110% commitment and a lot of sacrifice. I needed to explain to my friends and girlfriend that this is my career and it comes first. I've sacrificed my Friday nights. I'm always in bed nice and early.

"There is always going to be an element of abuse, but the Football Association is working hard to put this right. The Premier League needs to set a better example. What you see there filters down to grassroots football. If Wayne Rooney or whoever is behaving badly, that gets replicated around the country.

"Refereeing has changed me as a person. I used to be the quietest of people, but refereeing has given me a lot of confidence and helped me with my personal life and my love life.

"There are so many more opportunities to progress as a ref than as a footballer. There is a lot of commitment involved, but if a ref wants it enough, they'll get there. It's so enjoyable. I'd recommend it to anyone."

"I was never going to make it as a player, but I just love football and a ref gets paid to be involved in the game. What could be better? I love the banter and I love the game.

"A spectator recently shouted out that the football pitch was no place for a female referee and told me to get back to the kitchen and get out the ironing board. I've been a ref since I was 14 and haven't heard someone say that kind of thing to me for a good 10 years.

"There will always be people who disrespect you. It's about having the strength of character to cope. I've grown as a person a lot more as a referee. I'm so much more outgoing.

"You have to be massively committed. I'm out all day Saturday and Sunday and train three nights a week if I don't have a midweek game. I don't see my friends as often as I would like and I miss nights out, but they are very supportive and tell me they are proud of me. 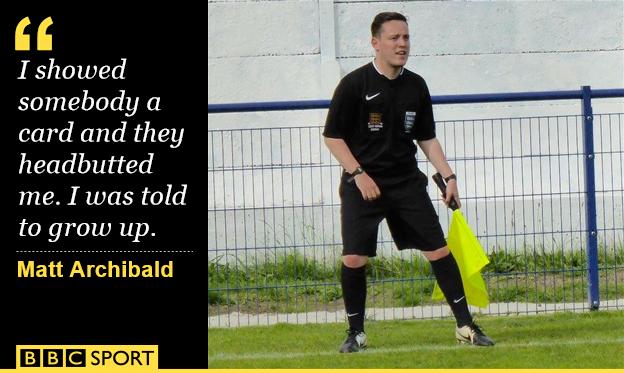 "I was with a few mates, probably watching a really, really bad refereeing performance at Rochdale Football Club, and decided to give it a go. I was really bad at football, so this was a way of staying in the game.

"I've been assaulted. I was about 19 or 20. I showed somebody a card, I can't remember if it was a yellow or a red, and they headbutted me. I just picked up the ball and walked off the pitch. I was told to grow up by some of the players. I was quite small at the time and a bit baby-faced, someone they perhaps thought they could manipulate.

"I went back to the changing rooms and started crying. I was in floods of tears and I thought about quitting. I took some time away from the game, about three months, came back for a game, didn't enjoy it and took another four months out.

"Since I've come back, I've never felt in any danger. Any negative experiences I've had, I've turned into a positive. You can still achieve what you set your mind to when you have the right support.

"Refs are normal people and don't deserve the abuse they get. It's easy to blame the ref - that will never change - but I'd urge people to take note of themselves before they jump all over us. What would I say to anyone who wanted to be a ref? Do it. It's the best thing I've ever done."

* More than 2,000 referees, mostly from grassroots football, took part in the survey, which was carried out by academics from Loughborough, Portsmouth and Edge Hill universities.

The results of that survey were then shared with the BBC Radio 5 live Investigates team, who spoke to some of the referees who had responded. You can listen to that programme again via the BBC iPlayer.